Blu-Ray Review: INTO THE FOREST 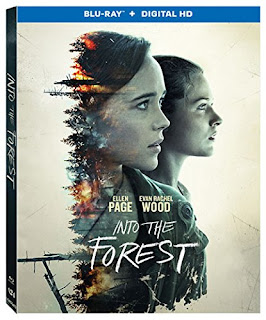 An apocalyptic art film? I don’t know if I’d go that far, though writer/director Patricia Rozema makes this feel like one. But at its heart, Into the Forest is simply a tale of the bonds of sisterhood. It also happens to take place as modern civilization is coming to an end.

Ellen Page and Evan Rachel Wood are Nell and Eva, two young sisters who live in a remote cabin with their widowed father. When an unexplained worldwide blackout occurs, Dad decides staying put is the best course of action, which doesn’t initially sit too well with his daughters; Nell has a boyfriend in town, while Eva’s budding dance career is put on hold. When their Dad dies in an accident, the two are alone to fend for themselves, forced to ration their supplies. As the months pass, Nell & Eva slowly learn to accept the power is never coming back (despite hopeful rumors) and must personally evolve in order to survive on their own.

Though the global blackout is the catalyst for this story, Into the Forest is not your usual post-apocalyptic epic. It’s mostly an low-key, intimate look at how these two learn to live, not just with each other, but with elements which threaten their lives (both natural and human). With every incident threatening their survival, their relationship grows stronger, one of them sort-of assuming a more parental role. The film may not be action-packed, but it's harrowing at times, particularly when a casual acquaintance from town shows up and violently changes their lives forever. Both Wood and Page are good in their roles. Page as the younger sister is particularly interesting, as we see her slow transition from a vulnerable waif to the more responsible and mature of the two.


The film is pretty deliberately paced and writer/director Patricia Rozena is far more interested in the characters than the premise, even if they aren’t always doing something interesting. In fact, despite a few intense moments, we aren’t always as emotionally involved with their plight as we should be. And even though the film draws us into their predicament, it isn’t really until the final act that we feel life and death is at stake. Then again, maybe we aren’t supposed to.

Into the Forest is, for the most part, well-made and offers a scenario that seems plausible, with fallible characters who never resort to behaving stupidly (unless the story requires one to). While not a feel-good movie by any stretch, it’s ultimately an optimistic film, even uplifting at times, a far cry from your usual world-ender.