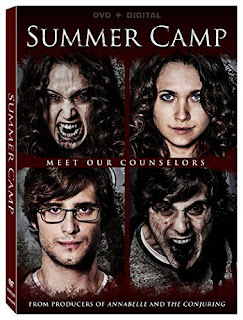 While a more accurate title for Summer Camp would be Deja Vu, it isn't without its rewards, though you have to be really, really patient.

Four young & pretty - and pretty dumb - counselors arrive at an old Spanish villa in the woods to prepare for a children's summer camp. There's also a creepy group of strangers living nearby in an RV, whom we briefly assume will spend the remainder of the film terrorizing these kids. Instead, a weird virus starts infecting everyone, turning them vicious, drooling and homicidal. While fighting and fleeing from these ravenous monsters, a few of the counselors try to figure out what's causing the outbreak.

Horror fans will easily be able to name-drop numerous classics this film liberally rips off during the first half hour alone, such as Friday the 13th, Evil Dead, 28 Days Later and The Texas Chainsaw Massacre. Summer Camp starts off hopelessly derivative and predictable, which isn't necessarily a deal breaker, but not only are these characters uninteresting, the film hardly makes a single attempt to put its own spin familiar tropes. One might even be tempted to quit watching because we're pretty sure we've seen this entire movie before (not helped by an introduction that nearly gives the ending away).

However, Summer Camp eventually throws in a few interesting surprises that snap us back to attention. It turns out the infection is only temporary, caused by a weird fungus in the camp's water pipes, originally grown and cultivated by the backwoods hicks (who've built a drug lab in their RV). Since the virus is actually survivable, the film creates some real tension at various times as these counselors put their thinking caps on and use actual logic to try and survive. The temporary nature of this virus also leads to an amusing scene where two uninfected characters are beating the shit out of each other.

By the final act, we've ultimately been given enough narrative twists which make the entire film worth sitting through (though thrill-seeking gorehounds might still be disappointed). Summer Camp won't make you forget the horror classics it liberally rips off, but I'd be willing to wager you've probably sat through a lot worse.