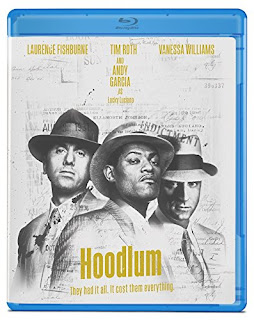 The problem with gangster films is that The Godfather set the bar almost impossibly high 44 years ago and remains the standard by which all the rest are compared. Only Scorsese's Goodfellas is truly worthy of mention in the same breath. 1997's Hoodlum doesn't even come close, though we shouldn't hold that against it, since the film is not without its virtues.

Hoodlum aims for a similar epic look and tone with its fictional depiction of a territorial war between two real-life mobsters, Harlem kingpin Bumpy Johnson (Laurence Fishburne) and Jewish mob boss Dwight Schultz (Tim Roth), while Lucky Luciano (Andy Garcia, no stranger to the genre) patiently waits in the wings to see how everything pans out before making his own moves. This is mostly Johnson' story, though, and he's depicted as sort of a Robin Hood of organized crime. Freshly released from prison and angered by Schultz' strong-armed methods of taking over the Harlem territory, where the numbers game is most people's only source of income, Johnson realizes that violent retribution is the only way to fight back, much to the dismay of Madam Queen (Cicely Tyson), who's quickly losing control of her empire.


A lot of this is interesting, though the film is narratively inconsistent. The conflict between Schultz and Johnson is pretty thrilling, as are the numerous bursts of violent action when these two are fighting for control. However, the relationship between Johnson and his wife, Francine (Vanessa Johnson), tends to slow things to a crawl, mainly because it doesn't appear that much effort was made to make Francine any more than window dressing. Later, when she makes a final decision regarding their marriage, it doesn't dramatically work because we've been given almost no prior hint that things were turning sour.

The performances from this impressive cast range from outstanding to ridiculously over-the-top. Fishburne is suitably stoic and empathetic as Johnson, giving one of the better performances of his career. On the opposite end of the spectrum, Tim Roth's scenery-chewing turns Schultz into a cartoon character, though he's clearly having a good time.

Though certainly ambitious, with authentic production design and period detail, Hoodlum is no classic and won’t make anyone forget the epics it's obviously inspired by. Still, it’s a fairly entertaining gangster flick that, while a bit overlong, never quite wears out its welcome. For fans of the genre, it is certainly worthy an evening of your time.