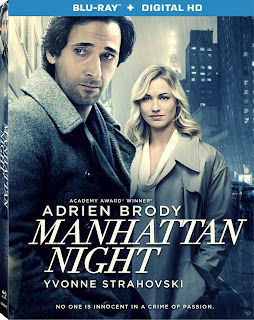 Manhattan Night has many of the same ingredients we typically find in classic film noir. There's the cynical world-weary narrator led astray by a woman. In this case, it's Adrien Brody as Porter Wren, a newspaper columnist who specializes in covering tragedy. Caroline Crowley (Yvonne Strahovski) is the sultry femme fatale Wren is unable to resist, even as she's leading him down a dark path. She implores him to investigate the mysterious recent death of her husband, Simon (Campbell Scott). While trying to unravel this mystery, Wren is blackmailed by his powerful, lecherous new boss, Hobbs (Steven Berkhoff), into recovering a flashdrive containing scandalous video, which he suspects Caroline possesses.

If we weren't convinced this was intended as an homage in the tradition of classic-era film noir, right down to Brody's grizzled voice-over narration, much of this would seem rather silly. There's also a lot of the same prerequisite soft-core sex featured in most neo-noir since 1981's Body Heat. So while Manhattan Night isn't the most original or memorable movie in the world, it's assembled well enough to maintain interest. Brody makes a fine cynical sap who's in over his head; Strahovski exudes enough sultry sexiness to get the blood boiling while still maintaining a vulnerability that keeps us invested in the character.


Plotwise, the film is less successful, trying to tell to two stories at once (both involve recovering missing video recordings) without really tying them together. Neither thread comes to a very satisfying conclusion, and one throws in a depressing out-of-the-blue flashback at the end that's totally out of place with established tone of the film.

Ultimately, Manhattan Night is certainly watchable, though a notch or two below the many popular quasi-erotic, neo-noir films which inpsired it. Performances by both lead actors help gloss over its narrative inconsistencies, at least the first time we're watching. After that, you and your pause button are on your own

Any chance you're not using the digital copy for Manhattan Night? I heard this was good.

We receive these discs from the studios and PR groups, who would not take kindly to us offering the digital copy codes to others. sorry.