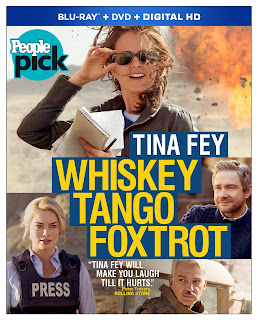 Tina Fey plays real-life journalist Kim Baker, who gets the opportunity to leave her desk and raise her profile by becoming a war correspondent in Afghanistan. What's initially supposed to be a three month gig turns into several years. Along the way, she develops friendships with colleagues, rivals and native Afghans. Long after the war ceases to be daily headline news, Baker has become accustomed to the relative ‘normalcy’ of living and working such an alien environment, where she and fellow journalists regularly risk their safety by day and party like a frat house by night.

Based on Baker’s book, The Taliban Shuffle, Whiskey Tango Foxtrot is an episodic dramatic comedy chronicling her three years there. The film is highly character-driven and quite a departure for Fey. She’s convincing, sympathetic and likable as Baker, handling the dramatic demands of the role as deftly as the more comedic ones. The good supporting cast helps tremendously; Martin Freeman is fun as a lecherous photographer who becomes her love interest, while Alfred Molina has a few amusing scenes as an Afghan government figure who’s also an insider’s news source for Baker.


While it does contain some highly funny moments, Whiskey Tango Foxtrot isn’t quite the comedy it’s been promoted as, which might be off-putting to some Tina Fey fans. Nor is it really a war film, though it looks and feels like a realistic depiction of the troubled political climate of Afghanistan, where something terrible could happen at any moment, and occasionally does. There are some scenes of jarring violence late in the story that feel like a sucker-punch (which I suppose is intentional). The film is also erratically paced at times, even meandering during the middle act. Despite many interesting characters and good performances, there are times when our attention begins to wane, much like viewers' interest in the war at the time.

But Whiskey Tango Foxtrot stops just short of wearing out its welcome with a finale and resolution that brings Baker’s story to a pretty satisfying conclusion. Whether or not it’s worth buying depends largely on your appreciation for Tina Fey (she is in nearly every scene). For everyone else, it’s still worth checking out at least once for the performances alone.