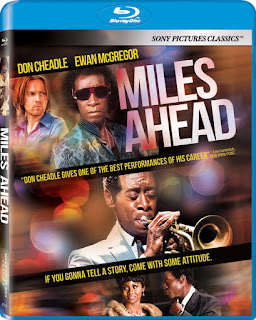 Though I know who Miles Davis is, prior to watching Miles Ahead, I couldn't have told you anything about him or a single piece of music he created. Afterwards, I still can't, other than he snorted a lot of coke and was married once. Then again, this isn't a biopic in the purest sense.

Instead, writer/director/star Don Cheadle takes creative liberties to plop the jazz legend into an actual plot to account for a period in the 70s when Davis had exiled himself from performing and the public eye. Here, along with Rolling Stone reporter Dave Braden (a fictional character played by Ewan McGregor), he's trying to recover a master tape of new music, stolen by the very record company he owes it to. Why Davis remains so protective of the tape isn't made quite clear throughout most of the film, but we get the impression that years of unpredictable behavior, drug abuse and health problems may be contributing factors.

Interspersed throughout the story are flashbacks of Davis' earlier years, mostly focusing on his tumultuous marriage to dancer Frances Taylor (Emayatzy Corinealdi, in a thankless role), though we do get a few glimpses of his creativity in the studio. These scenes are the only ones that appear to be truly biographical, and ironically, they are the least interesting. From a narrative standpoint, they tend to suck the viewer out of the present-day story, which may be fabricated, but is far more compelling. By this time, Davis is a gun-wielding, drug-addled trainwreck, though his love for music (and Frances, now long gone) is always obvious.


As Davis, Cheadle delivers the best performance of his career, perhaps even Oscar worthy, since he completely disappears into the character. Davis doesn't come across as particularly likable, but unlike the recent Hank Williams biopic, the meandering I Saw the Light, we sort-of empathize with him at times. The supporting cast is solid, but without question, Cheadle is the whole show here, which goes a long way in glossing over the film's narrative issues.

Of course, Davis' music is here in abundance. For fans of this stuff, it's one hell of a soundtrack. As for the film itself, don't look for anything resembling your traditional Hollywood biopic. Miles Ahead tells an interesting story, but for better or worse, it's the fictional elements that truly carry the film, to the point where the facts are an almost unwelcome intrusion.