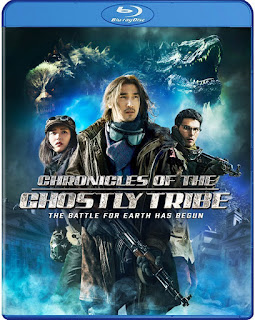 At first, Chronicles of the Ghostly Tribe shapes up to be a pretty decent fantasy/action film, sort of a Chinese variation of 1999's The Mummy. It begins with a group of Chinese excavators, led by Professor Yang (Wang Qingxiang), who discover fossils of massive reptilian creatures, along with an ancient temple. It turns out that, not only are some of these creatures still alive (and pissed off), the temple itself is a gateway that allows demons to return and raise all kinds of hell. These first thirty minutes are fun and exciting, featuring some pretty nifty CGI (obviously created with 3D in mind) and impressive set design.

Fast forward a few years, and Hu Bayi (Mark Chao), the only apparent survivor of that expedition, is working at a small library filled with rare books (though not in New York City, as the cover synopsis inexplicably claims). He's still tormented by those events and the loss of the girl he loved, Ping (Yao Chen). Hu is also going through physical changes, which is later explained by the curator he works for, whose actually a guardian of the demon temple...or something like that (this guy provides a lot of the film's exposition, some of it clear, some of it perplexing). Meanwhile, the military is searching for Hu to lead another expedition after the not-dead-after-all Yang vanishes yet again. Luckily for Hu, Ping shows up again, too, though not quite her former self. They lead a team to a small desert town that has been destroyed by some nasty critters that look like a cross between wolves and dragons.


That's a lot of plot for one movie, which grows more convoluted as it goes (and we haven't even mentioned the deadly swarms of firebats yet). Despite a promising beginning, Chronicles of the Ghostly Tribe moves in fits and starts afterwards, too often pausing for key characters to explain to Hu (and us) what's going on. Some of the action scenes are good, though the CGI effects used to depict the wolf-dragons are rather shoddy compared to the impressive giants from the first act.

Still, there's a quirkiness to the film that keeps things interesting, such as numerous musical numbers singing the praises of Chinese communism, Daniel Feng as the comic relief sidekick who moonlights as an Elvis impersonator and the everything-but-the-kitchen-sink approach to the story (which also manages to include aliens before all is said and done). Chronicles of the Ghostly Tribe probably plays better in 3D as originally presented in theaters, but it's still not a bad way to kill a few hours.