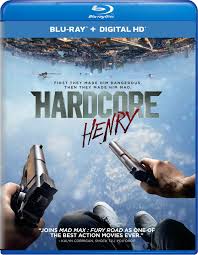 That statement is not necessarily based on the quality of the film, but the way it was shot. I’m pretty sure I would have puked within the first thirty minutes. Even watching it on video, there were a few moments when vertigo threatened to rear its ugly head.

Remember the original Robocop and the scenes where Alex Murphy is resurrected as a crimefighting cyborg, all of which are depicted from his point of view? Hardcore Henry gives us an entire film told from the title character’s perspective, which plays like a first-person shooter video game. Barely taking time to introduce the main characters, the movie hits the ground running and proceeds to pummel the viewer with non-stop, hyperkinetic and extremely violent action scenes.

As for the story...it barely exists. He learn Henry has been revived as a lean, mean killing machine with cybernetic implants and prosthetic appendages. He’s pursued by a nefarious megalomaniac, Akan, who possesses telekinetic powers (which are never explained) and plans to build his own army of cyber-soldiers. Assisting Henry is Jimmy (Sharlto Copley), who frequently pops up at opportune moments despite repeatedly being killed (how that’s even possible is explained, rather ingeniously). Henry himself has almost no memory aside from a fleeting recollection of his father (Tim Roth), which is all we learn as well. Still, the film is not without a few clever, humorous moments, and Copley is highly amusing as Jimmy in various guises. At the very least, despite the emphasis on carnage, you can’t accuse the man of phoning-it-in.


Here, plot and characters take a backseat (perhaps even trunk space) to the gimmick of experiencing all of this through Henry’s eyes, even when they occasionally pop out of his head. The film is ultra-violent and the camera almost never stops moving, to the point where the viewer is almost physically exhausted by the time the end credits roll. For some, the novelty will wear off quickly, rendering Hardcore Henry more of an endurance test. But if you’re totally onboard with the premise (or enjoy watching other people play video games), there’s some shameless enjoyment to be had.

NOT BAD...UNLESS YOU SUFFER FROM MOTION SICKNESS