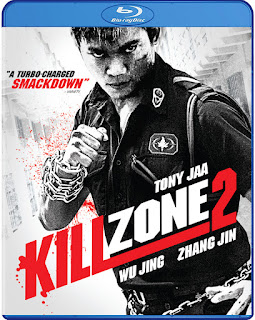 I've never seen the original Kill Zone (aka SPL). The good news is that it doesn't matter. Kill Zone 2 (aka SPL: A Time for Consequences) is pretty much a sequel in-name-only. Other than Simon Yam, it features a complete different cast of characters and the plot bares no relation to the original.

More good news: Kill Zone 2 is intense and bloody, with a lot of expertly-choreographed martial arts action. It's also well-acted and features characters we either love or love to hate.

The bad news? Despite a lengthy running time, Kill Zone 2 is almost completely undone by a shockingly abrupt and lazy conclusion. Without going into details that would spoil the party, the film spends so much time and effort trying to knock our socks off with kinetic fight scenes, a complex story and interconnecting characters, it's a shame (and aggravating) to watch it unravel before our eyes during the final few minutes.

Until then, though, we're mostly drawn into this dark tale of human organ trafficking, headed by criminal kingpin Hung Man-biu (Louis Koo), who also plans to steal his own brother's heart to replace his own failing ticker. He's aided by a corrupt prison warden, Ko Chun (Zhang Jin), who kidnaps innocent victims to harvest their organs. An undercover cop, Chan (Wu Jing), intentionally becomes a drug addicted henchman to gain Hung's confidence, but when he's exposed, he is sent to the same prison run by Ko. Meanwhile, one of the prison guards, Chatchai (Tony Jaa), has a young daughter, Sa, who'll die without a bone marrow transplant but a suitable donor has yet to be found (who that turns out to be can either be seen as a genius plot twist or a contrived convenience). Circumstances have Chan and Chatchai teaming to fight Hung's mob, resulting in numerous violent and exciting confrontations.


For the most part, Kill Zone 2 delivers as promised, with enough action to gloss over the more glaring plot contrivances (and there are several). But while the ailing child subplot provides unexpectedly bittersweet moments, it ultimately becomes the film's undoing. During the final act, the scenes featuring Sa almost seem to exist in another movie. When the action comes to a sudden, screeching halt to focus on her character for the denouement, we almost feel cheated.

Sa’s a charming character and her relationship with both Chan and Chatchai does give the film some emotional heft. But ultimately, that isn’t what most of us signed-up for. Kill Zone 2 might have been better-off getting rid of that entire subplot to provide a more fitting climax to the mayhem we've enjoyed up to that point.

NOT BAD...BUT LIKE BEING PROMISED A CAN OF FRISKIES AND GETTING CAT CHOW INSTEAD