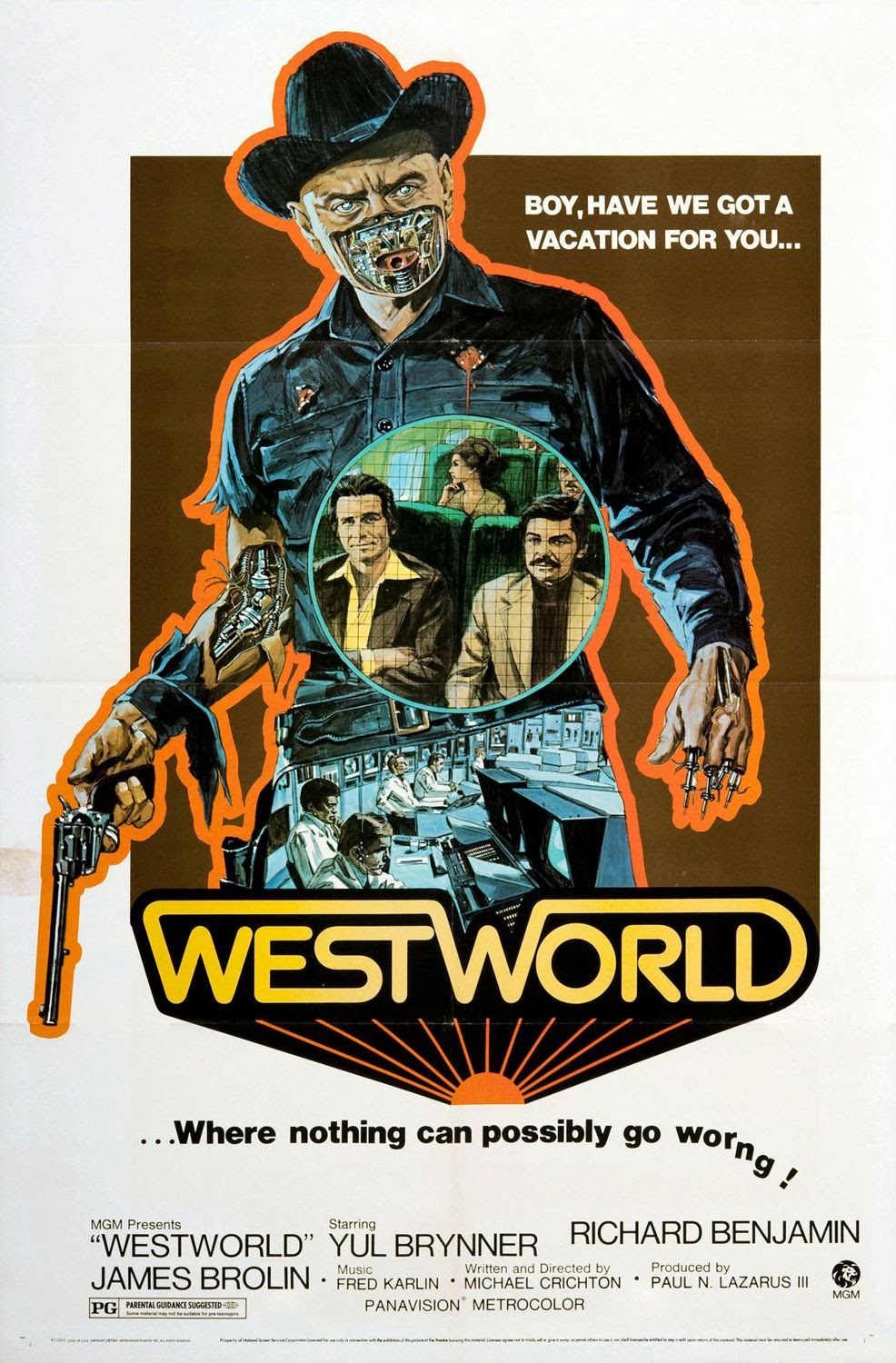 Of all the shitty ways to make a living, working for Delos as part of the clean-up crew would have to rank among the worst.

Sometimes revisiting old films raises nagging questions which are never addressed, and the more I watch them, the more my overactive brain goes to work, obsessing over details which have no real baring on the story. I’m not talking about plot holes, but those films which, if their concepts and ideas were reality, have  me pondering the unseen ramifications. 1973’s Westworld eventually raised such a question, one I should probably be thankful isn’t answered. Still, it torments me (and probably no one else).

Westworld was the directorial debut of Michael Crichton, he of Jurassic Park fame, but best-known at the time as the author of The Andromeda Strain (adapted by Robert Wise into a terrific and disturbing film in 1970). Westworld is far less complex. Taking place in the near future, people willing to shell-out $1000 per day can vacation at Delos, an adult amusement park which consists of three distinct sections, Roman World, Medieval World and Westworld. Whatever world you choose, you can totally indulge in your every whim, no matter how decadent, which will be serviced by willing, obedient and lifelike androids.

Much of the story focuses on James Brolin and Richard Benjamin as Peter & John, two spoiled yuppies who decide to play cowboy in Westworld. They get into gunfights by day (repeatedly blowing away robot gunslinger Yul Brynner, looking exactly like he did in The Magnificent Seven, a brilliant homage) and bang saloon prostitutes by night. And while the guests are sleeping-off their debauchery, Delos’ maintenance crew gathers all the damaged robots for repairs in order to get them ready for the next day.

Because this is Michael Crichton we’re talking about (whose tales about technological terror were always his biggest sellers), something goes fatally wrong…the park’s computer system begins to malfunction, making the robots turn homicidal. In the gripping final act, The Gunslinger methodically and mercilessly stalks Richard Benjamin throughout the park.

Some have credited Westworld as the first sci-fi movie to depict a computer virus (long before it was even a term). The problem is even discussed by the perplexed Delos engineers as some sort of infection. Whether or not that assessment is accurate isn’t my nagging question, nor is the film’s biggest gaping plot hole, in which The Gunslinger is suddenly able to shoot guests dead (since these robots are programmed to lose every gunfight, why would you arm them with real ammunition in the first place?). Hell, I don’t even have much of a problem with Richard Benjamin’s porn-star mustache. Westworld is a lot of big, dumb fun, the kind of movie where you check your brain in at the door and, despite the fact nearly everyone in the movie dies, kinda wish a resort like Delos really existed.

But if such a place were technologically possible, the reality is it would likely be as filthy as a truck stop restroom.

Far-fetched as it may be, Westworld is arguably 100% accurate in one aspect…if creating such realistic androids was even remotely possible, the first thing most of us would want to do is fuck one. Peter & John bed-down two robo-hookers on their very first night at Westworld, probably displaying more patience than most of us would in a park where nothing is forbidden. Moral ambiguities aside, that’s not my nagging question either. Free of inhibitions, I’d likely try to nail the nearest broad in a bustier the second I stepped off the Delos shuttle.

…unless I really thought it through.

As stated before, at night is when the Delos crew comes out to repair and maintain robots while the guests are asleep. Those that have been shot, stabbed or beaten are patched up and ready for more violent mayhem.

But here’s my nagging question…

Imagine if that was your job…wiping, disinfecting and scraping out these robots of all the nasty spunk pumped into them by oversexed, middle-aged CEOs, who are probably as undiscriminating where they deposit their seed in the real world as they are at Delos. And that’s just cleaning up what the normal guys leave behind. What about those who would choose this opportunity to violate every single orifice of the female anatomy, or those who regularly include veggies or gerbils as part of their sexual diet?

Hey, robots aren't exactly disposable, so somebody’s gotta clean them up. That job would be worse than emptying the bedpans in a retirement home…at least you know what those old folks ate a few hours ago, and you’re pretty damned certain they haven’t spent the entire day as a walking sperm bank.

Watching Westworld today, I can’t get past the fact that shit ultimately rolls downhill to the one guy tasked with cleaning up bodily fluids. Any employee willing to do such a job deserves more pay than those who built the fucking park in the first place.

Right now, a few of you might be thinking to yourselves, “I wouldn’t never do such a job. I’d be one of those wealthy guests doing all the fucking…with gerbils!”

Well, if you’re fortunate enough to be in such a position of power, you’ve also likely dealt with enough underlings to know some of them do not necessarily possess the same dedication to their jobs as you do. They cling to the bottom rung of your corporate ladder and probably don’t give a flying fuck about anything but your signature on their paycheck. Do you really think folks like this care one whit about complete orifice sterilization when a simple wipe-down will be enough keep them employed for another day?

Think about that the next time you feel like sticking your Johnson into a foreign object, especially a robot.
Posted by D.M. Anderson at 8:26 AM