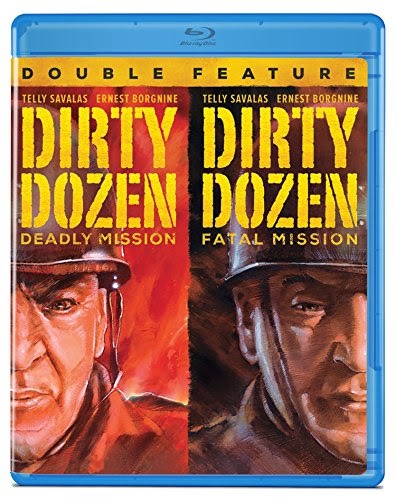 The Dirty Dozen is undeniably one of the great war films of the 1960s (in this writer’s opinion, it's one of the best of all time). The compelling story, dynamic characters, eclectic cast and perfect direction (by the always underrated Robert Aldrich) seem as fresh today as they did nearly 50 years ago. Simply put, it’s a one-of-a-kind film experience that can’t be duplicated.

But not for a lack of trying. In addition to numerous inferior knock-offs which popped-up over the years, a made-for-TV sequel, The Dirty Dozen: Next Mission, was produced in 1985, featuring some of the same characters and actors who survived the original film (including star Lee Marvin). It looked & played like just another TV movie, but brand name familiarity made it successful enough to spawn two more sequels, The Dirty Dozen: The Deadly Mission and The Dirty Dozen: The Fatal Mission, both now available on Blu-Ray for the first time.

As part of the so-called Dirty Dozen franchise, their connection is tenuous at best. Only Ernest Borgnine returns as the same character from the original. Telly Savalas, who played the demented Maggot in the first film, returns as a completely new character, Major Wright, who recruits more condemned prisoners to partake in new suicide missions.

However, if you’re somehow able to forget the whole Dirty Dozen connection, lower your expectations and watch them on their own terms, these films, while never escaping their 1980’s made-for-TV origins, provide some passable entertainment. Savalas is no Lee Marvin, but makes a stoic leader, guiding casts of somewhat familiar faces (mostly TV actors) through their paces. Neither story is as interesting as the original, but you already knew that. Both films are directed by Lee H. Katzin, skilled at depicting budget-conscious action in previous television programs such as Man from Atlantis, Space: 1999 and MacGyver.

These films are mildly entertaining, though ultimately forgettable, save for any nostalgia one may have for a time when TV movies ruled the ratings on Sunday nights. This was back when copping a familiar brand name to churn out low budget television sequels made them seem like a bigger deal than they really were.