PHANTASM II and the Grand Illusion 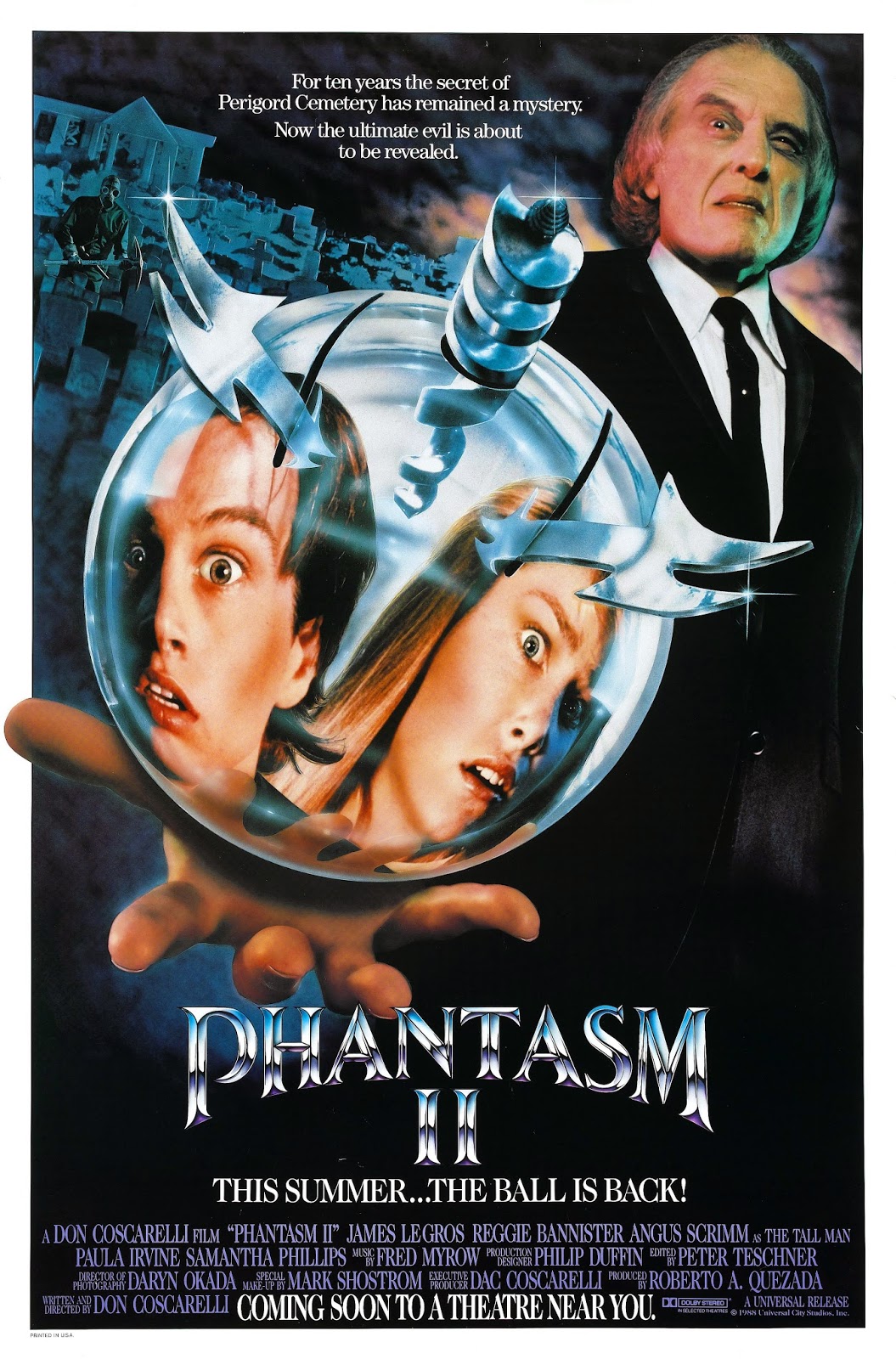 If you’re over 40, maybe a few of you can relate to this…

I was a complete ass in my early 20s, but never realized how big of an ass until years later, when maturity whipped-out its indestructible mirror and shoved my face against its glass. While I cringe at my reflection, some solace can be found in the knowledge that I’m no longer that guy and, perhaps most importantly, no longer in contact with many of the people who knew me at my worst (though there are some to whom I owe an apology).

Yours truly made the mistake of marrying his high school sweetheart before the ink on his diploma was dry (another sad story told HERE). Like many star-crossed young lovers, we divorced a few years later while still basically kids. My parents were pretty happy because they hated my first wife, and agreed to pay for me to go back to school to make something of myself. I couldn’t move back home (Dad was still distrustful from my dubious life choices so far), so they arranged for me to live with my grandmother in Prosser, a tiny farm town in Washington where the cows outnumber the people.

Since I’ve always been a fairly decent artist, my folks pretty-much arranged in-advance for me to attend a Graphic Arts program at Perry Technical Institute in nearby Yakima. While grateful for this second chance, I was mostly concerned with making up for all that wasted time being monogamous.

By the time my divorce was final, I’d dropped a lot of weight. I also made the decision that, for the first time in my life, I was gonna look and dress how I wanted, not what a wife, parent or employer expected. I grew my hair out, got my ear pierced and started wearing a lot of black. Most of the time, I resembled an unholy cross between David Coverdale from Whitesnake and Kiefer Sutherland in The Lost Boys. My appearance elicited some chuckles from some of the yokels of Yakima, but I didn’t give a damn, since my rocker garb seemed to appeal to a lot of women.

I was never a guy who really turned heads in high school, so this new-found confidence had me trying to nail everything that moved, saying or doing whatever it took to get between the sheets, from obsessing over my appearance to making-up awesome lies about myself (“Yeah, I’m in a band”). In other words…shallow as an Arizona puddle.

Even douchier was when I chose to fake a British accent, honed by endlessly quoting Nigel Tufnel from This is Spinal Tap. Some of the dimmer bulbs I met in bars would fall for my ruse (or maybe they knew I was full of shit and simply didn’t care). At any rate, I was never in it for the long haul, so what did it matter? I was simply playing-up my assets to meet my needs at the time. Who cared if my bullshit didn't hold up to any scrutiny?

But there was one girl, Melanie, who totally bought into the whole English rocker thing. I felt kind-of guilty because, even though she wasn’t exactly the brightest crayon in the box, she was pretty, really nice and, as I discovered on our first (and only) date after taking her to see Phantasm II, spectacular in the sack. However, unlike a lot of one-night-stands, Melanie was someone I wouldn’t have minded spending more time with. But I had already laid my bullshit cards on the table. The real me couldn‘t compare, so this particular relationship was doomed from the start.

Phantasm II was an ironically-fitting first date movie, as it’s the complete cinematic version of my life at the time…aesthetically impressive & sexy on the surface, but shallow and phony when examined too closely. The original 1979 film was no great shakes, bordering on amateurish at times. Still, there was at least some evidence of sincerity in its patchwork attempts at surrealism. But let’s face it…the main reason Phantasm still resonates at all today is the single classic scene in which a flying silver sphere strikes one of The Tall Man’s henchmen in the forehead, drills into his skull and drains his blood as he twitches on the mausoleum floor.

After a brief prologue which recaps the chilling climax from the original (with one preposterous change to make a sequel possible), Phantasm II takes place a few years later, when Mike (James LeGros, replacing Michael Baldwin) is released from a looney bin. He’s joined by Reggie (Reggie Bannister) and the two embark on a long trek in their souped-up Barricuda to locate & destroy The Tall Man (Angus Scrimm). If you have no idea what any of this means, you obviously haven't seen Phantasm, and this sequel doesn't bother bringing you up to speed. Anyway, The Tall Man's trail is easy to pick-up, since he’s left dozens of ravaged and desolate small towns in his wake.

One would think, by now, at least someone besides these two would have noticed entire cities have been destroyed and hundreds are missing, but never mind. We aren’t supposed to scrutinize the story too heavily, much like I didn’t expect women to question why a British rock star wannabe would settle in an agricultural hub like Yakima. In fact, even though Phantasm II is a sequel, it plays as though writer/director Don Coscarelli was counting more on his balls to sell the film, rather than logic, continuity or anyone who recalls the first one so fondly.

And by balls, I mean that literally. Despite a few fleeting attempts at the same surrealism as the original, Phantasm II is mostly a straightforward chase which solely exists to flaunt the one asset that made the first film a cult classic…the deadly flying balls. This time it’s balls, balls everywhere…drilling skulls, chopping off appendages, tearing into bodies, bursting from faces…all in loving, gory detail.

These scenes are easily the most audience-rousing (okay, the quadruple-barrel shotgun is pretty cool, too), deflecting us from the fact that Phantasm II, despite a bigger budget and better production values, has little else. It's a shallow facsimile of the original Phantasm, much like a certain douchebag from the past spotted in a mirror not long ago, who superficially resembled David Coverdale. It’s all surface, no substance…cynically making itself look as good as possible for the few moments it exists in your life. Like Melanie’s initial impression of me (and why we dated only once), it’s a fun flick, but doesn’t stand up to any scrutiny whatsoever. To revisit it a second time would destroy any illusion of greatness.

That’s no way to live, and certainly no way to make movies of any lasting merit. After flunking out of college (though I eventually went back), I gave up the whole rocker ruse, quit scoping the bars for temporary friendship and started just being myself (for better or worse). Coscarelli did too (hey, he made Bubba Ho-Tep!), but not before exploiting that one great scene from the original Phantasm into two more even shallower sequels (both with a lot more balls, so to speak).
Posted by D.M. Anderson at 5:16 PM