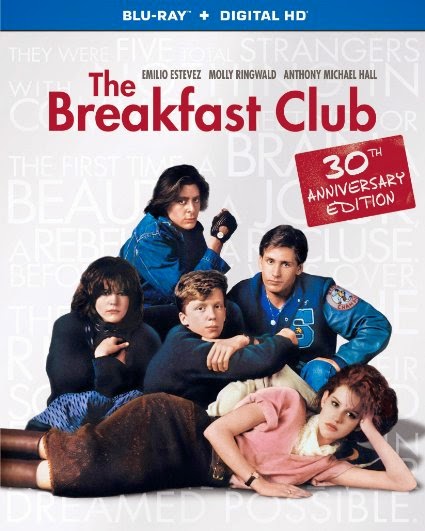 How time flies. The Breakfast Club is now 30 years old, and the young adults who made it a pop culture phenomenon are middle-aged, most-likely with angst-ridden teenagers of their own.

It seems like just yesterday that this film defined a decade as much as Madonna, parachute pants and wine coolers. Though this isn't writer/director John Hughes’ best film (Sixteen Candles holds that distinction), The Breakfast Club is his most iconic, and one of the first which comes-to-mind in any discussion about the 1980s. Because it’s clearly a product of its time in every conceivable way (no way could you remake it today), this 30th Anniversary Blu-Ray is worth its weight in gold for anyone who nostalgically looks back at the 80s as their golden years.

However, a funny thing happens when you watch it decades later…you notice how superficial most of these characters really are, how their issues ultimately don’t amount to much in the great scheme of things (or, as my oldest daughter would put it, First World Problems). But weren’t we all like that as teenagers…every problem a crisis, every adult an enemy? Of course we were, so when we look back at The Breakfast Club and roll our eyes at what these kids say and do, we’re really confirming that we were just as silly and melodramatic. In that respect, The Breakfast Club remains timeless, no matter the decade.

You’ll also notice what dates the film more than anything (aside from the synth-pop soundtrack) are the exaggerated comedic moments which pander to the dummies in the crowd, such as how Andy Clark (Emilio Estevez) reacts after smoking pot, or presenting Assistant Principal Vernon (Paul Gleason) as a clueless (and abusive) buffoon. Then again, this was typical of most movies aimed at teenagers in the 80s, nearly all of which owe no-small-debt to The Breakfast Club, much like every current pop-tart on the radio should worship daily at the alter of Madonna.

Dated as it may be today, The Breakfast Club provides a cinematic snapshot moment in time. Its stars (including Molly Ringwald, Judd Nelson & Anthony Michael Hall) were as big and popular as they would ever be. The film’s aesthetic is a supreme example of perfect timing, appealing to the so-called ‘Me Generation’ more effectively than any other movie released that decade. It also forever-cemented John Hughes’ reputation as the primary purveyor of teen-centric cinema. Most importantly, even three decades later, The Breakfast Club is still a lot of fun.