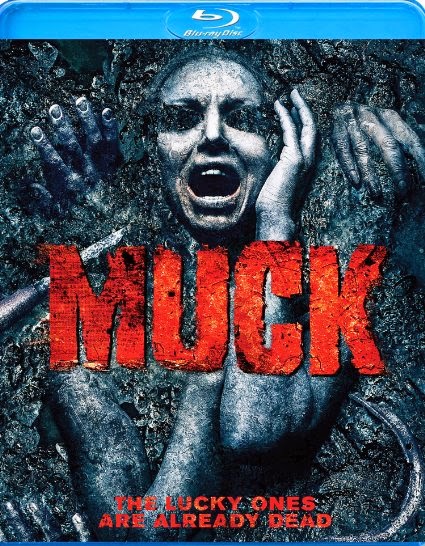 To put it mildly, Muck sucks.

Not in an Uwe Boll kind-of-way, either. At Least Boll’s cinema suppositories manage to entertain by virtue of their jaw-dropping ineptitude. In fact, Muck would be far more entertaining if you were able to laugh at it. The sad thing is, I think there are times when we’re supposed to be laughing with it, but that doesn’t happen either. Instead, this is an incoherent, rambling, voyeuristic mess.

By incoherent, I mean Muck literally has no beginning or climax. It wasn’t until doing background research to write this review that I learned Muck is the middle chapter of a supposed trilogy, but for some unfathomable reason, the first to be made (who's idiotic idea was that?). No attempt is made to explain what previously happened to these characters (all of whom are supremely obnoxious and behave stupidly, even by horror movie standards). Hence, many of their actions and allusions to what’s already occurred are incomprehensible. But the gist of the film has a half-dozen douchebags and hotties being stalked by a tribe of swamp-dwelling albinos. Some ‘new’ characters are introduced, mostly Playboy models, who are given an inordinate amount of screen time to flaunt their physical assets, only to disappear from the story completely once the striptease is over. Speaking of which…

Writer/director Steve Wolsh appears dedicated to lovingly leering over every female in the cast, exploiting every conceivable opportunity to show them showering, stripping, jiggling as they run and strutting around topless (doused in water, sweat or blood). Each bouncing breast and shapely ass is given as much screen time as the actresses they’re attached to and the albinos hunting them down. Wolsh even shoves his already-weak story completely aside to spend extra minutes lingering on Playboy Playmate Jaclyn Swedberg, who performs a private lingerie show for herself in a bathroom. His voyeurism reaches almost comical levels. Tittilation has its place in some horror films, but just like the softcore porn movies on Cinemax, showing sweat-drenched skin ultimately becomes boring after awhile. For those of us who aren't 14 years old, it would be nice to get back to the horror at-hand. Speaking of which…

Most of the performances in Muck are actually pretty good. Too bad the dialogue these actors are saddled with is godawful, including lame attempts at referencing other films (such as the out-of-the-blue and out-of-place quotes from The Princess Bride). Or how about the fictional town where all this takes place…West Craven (excuse me while I repeatedly slap my knee in fake laughter)? Worse-yet, even though no effort has been made to establish these characters in the first place, we’re still forced to endure long, boring, superficially-hip conversions between them (many of which seem badly improvised).

So what we’re left with is a supposed horror movie which often forgets to be a horror movie. It isn’t until the goofy end-credits start to roll that we realize the whole thing is supposed to be a hip & funny homage to previous films, meaning Wolsh has failed miserably (your movie’s biggest laughs should not come after it’s over). I still don’t understand the purpose of beginning your franchise with the middle chapter. Such a move isn’t even remotely clever, especially since this ‘chapter’ does nothing to make the viewer give a damn about future installments. Yet there’s still an unwarranted air of conceit which tries (desperately?) to suggest anyone not already onboard the Muck train simply doesn’t “get it.”

By the way, to the few of you who might be swayed by seeing Kane Hodder, prominently featured in the credits...he's in the film for about five minutes, looking like Darth Vader after Luke removes his mask in Return of the Jedi.

Hiss! Who let this dog into the house?!?