Blu-Ray Review: WITHOUT A CLUE 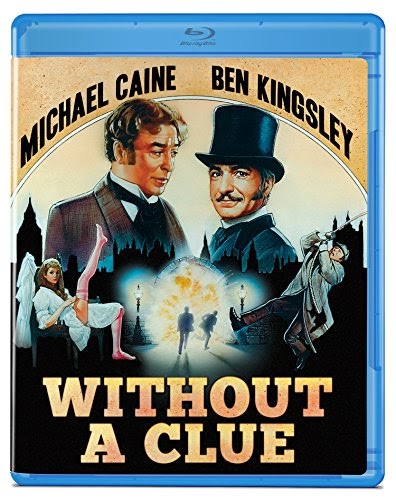 Without a Clue is one of those forgotten little films from the late 80s, probably playing in one of the smaller auditoriums of your local cineplex for a few weeks before quietly disappearing. Perhaps you even checked out the movie’s cast and concept and figured, “Hey, that might okay.”

And for the most part, Without a Clue is pretty good. It features Michael Caine (slowly emerging from the ‘paycheck’ era of his career) and Ben Kingsley (still relatively fresh in our minds after winning a Best Actor Oscar for Gandhi) as Sherlock Holmes and Dr. Watson. Of course, Sherlock Holmes has been depicted in films since the days of Basil Rathbone, but the twist this time is that Watson (Kingsley) is the genius detective, who created Sherlock Holmes as the main character when writing about his exploits. The stories prove so popular that Watson is forced to hire an actor to become Holmes for the public. Unfortunately, the man best-suited for the role, Reginald Kincaid (Caine), is a complete idiot, not-to-mention an irresponsible, alcoholic womanizer.

Holmes’ arch enemy, Professor Moriarty (Paul Freeman), is the main villain, but the actual plot of Without a Clue is perfunctory, meaning his appearance doesn’t amount to much. The movie mostly plays-up its role-reversal concept, leaving little room for his dastardly deeds. Aside from a few comedic story twists during the final act, most of the film focuses on Watson’s utter frustration at Kincaid’s idiocy, which is often amusing, if seldom uproarious.

While no classic, Without a Clue is a good-natured, congenial fun, with charming performances by Caine & Kingsley, who seem to be enjoying themselves here. Like many other obscure titles recently resurrected by Olive Films, this Blu-Ray release is a fun nostalgia trip for the select few who fondly remember the film.