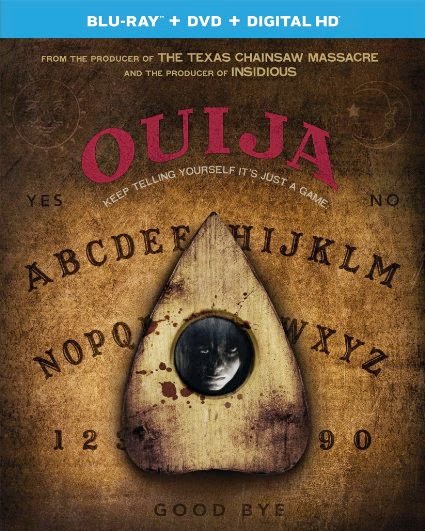 If nothing else, the idea of a movie based on Ouija is far less ridiculous than, say, Battleship or Tetris (yes, a Tetris movie is in development). Though few take Ouija too seriously, there was always something slightly sinister about the board and the séance-like way the game is played that has ingrained itself on popular culture over the years, probably why it has been featured in many previous horror movies. One can easily imagine a fairly creepy little story could be derived from the concept. And for a film counting on brand name familiarity to sell tickets, Ouija actually begins pretty well, managing to avoid coming across like a 90 minute Hasbro commercial (the company which owns the game). Too bad it ultimately descends into cheap scares and dull formula.

Five high school kids are reeling from the recent death of Debbie, one of their classmates. Debbie’s best friend, Laine (Olivia Cooke) discovers an old Ouija board similar to one they use to play with as children. It turns out Debbie had been playing the game by herself (which apparently, you aren’t supposed to do). Laine coaxes her friends (and eye-rolling emo sister) to use the board to contact Debbie in the afterlife. They make contact, of course, but not with Debbie, which soon puts them all in danger.

Our main characters are about as interesting and complex as mac & cheese, but the first half is surprisingly atmospheric for a movie aimed at the mallrat crowd, even suspenseful at times. No one will mistake it for The Exorcist (nor is it ever that scary), but at least it avoids the product-placing cynicism of previous Hasbro movies (like Battleship and Transformers).

Unfortunately, Ouija falls apart roughly around the point it feels the incessant need to provide an explanation for the supernatural goings-on. Too much exposition has killed more horror films than I care to count. The total absence of explanation or backstory is what often makes the best ones so memorable, and had Ouija gone that route, it could have been a nifty little thriller. Instead, it spirals into a depressing checklist of horror clichés…a demon’s origins, characters picked off one-by-one, gratuitous jump scares and, of course, the tried-and-true open-ended coda that ominously hints that it’s not over yet.

Then again, perhaps it’s unfair to have such expectations for any movie based on a board game, especially one which will still likely amuse its intended audience (young teens who’ve probably never seen a real horror film). Sure, Ouija ends up being a grab-bag of familiar tropes, but it’s competently made and does more with its concept than many other toy-based movies. It might even be the perfect rental for that sleepover your pre-teen kid keeps bugging you about.

EXTRAS:
Featurettes: The Spirit Board - An Evolution; Icon of the Unknown; Adapting the Fear