Blu-Ray Review: THE THEORY OF EVERYTHING 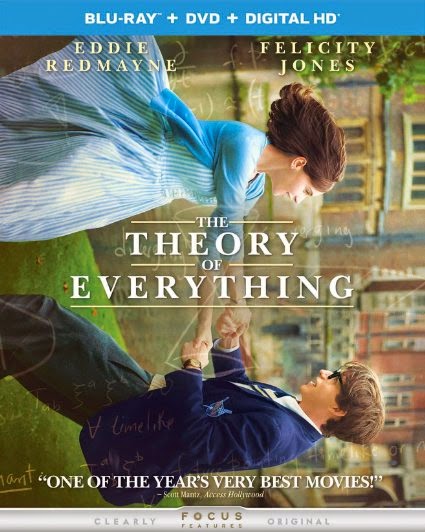 The first thing we walk away thinking after seeing The Theory of Everything is that Stephen Hawking is even more amazing (considering what he's had to overcome) than we initially assumed. The second thing is that his wife, Jane, is an equally-remarkable human being in her own right. The third is that both Eddie Redmayne’s and Felicity Jones’ Oscar nominations are well-deserved.

The Theory of Everything is not your standard biography of a renowned figure. Rather, it’s mostly the story of two people who fall in love and their resilience to stick together despite the life-altering affliction which strikes one of them (Hawking was initially given only two years to live). The film covers their 30+ years together, through three children, Stephen’s groundbreaking theories and the emotional struggles which eventually drove them apart. It’s that last aspect which provides the emotional heft of the movie. Not only do we get Stephen’s incredible story, but the sacrifices Jane herself made over the years, at the expense of her own dreams and goals.

Redmayne, tasked to portray Hawking from a nerdish, awkward student through the degenerative disease which physically ravaged the man, is stunning; he truly embodies Hawking from beginning to end. His performance is so commanding that one might overlook Jones’ equally-impressive turn as Jane, the true emotional center of the film. Stephen may have lost use of his physical abilities, but Jane herself is to be admired for her own personal sacrifices. Her increasing unhappiness eventually has her finding love elsewhere, yet she doesn’t suddenly become a villain because it’s doubtful most of us would even sign-up for this life, much less see it through.

The end result is a movie that’s both joyous and sad, inspirational and arduous, an emotionally-satisfying love story and a comprehensive biography. It’s easy to see why The Theory of Everything garnered all its Oscar nominations (including one for Best Picture), and would make a great pre-award double feature with the similarly-themed The Imitation Game. This film is an all-around winner.