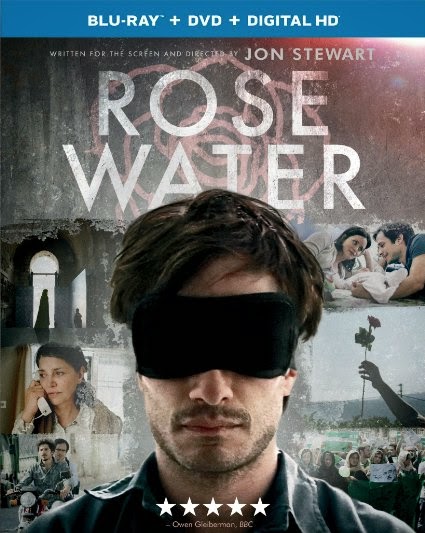 If nothing else, Rosewater is a story obviously important to first-time director Jon Stewart, perhaps because journalist Maziar Bahari’s imprisonment was due in-part to an ill-timed appearance on The Daily Show (taped in Iran while Bahari was covering the controversial 2009 election for Newsweek magazine). Though returning to his home country simply as a journalist, he captured on-tape the windfall of what many perceived to be a stolen election, including violence which resulted in some deaths. That, coupled with the Daily Show footage, prompted the powers-that-be to declare him a spy, using the media to spread anti-Iranian propaganda.

Bahari was imprisoned for 118 days (mostly blindfolded) and subjected to psychological torture, mostly at the hands of an interrogator referred to as “Rosewater,” due to how he smelled. In exchange for his life, the Iranian government wants Bahari to make a public confession that he is indeed a spy. Not helping Bahari’s case is the fact his father and older sister were both previously imprisoned for anti-government protests in the past.

This has the makings of a truly depressing movie, or worse, one of those dreaded films you feel more obligated-than-compelled to see. So it’s to Stewart’s credit that Rosewater, despite its subject matter, is ultimately an exciting and uplifting film, even though we walk away with the impression that Bahari’s ordeal will likely amount to little more than a footnote in the tumultuous history of that region. But while we’re in the moment, we empathize with Bahari, a man (and expectant father) of journalistic integrity whose truly a victim of circumstances. We like him and develop a personal stake in his safety.

What makes the film work are the performances by Gael Garcia Bernal as Bahari and Kim Bodnia as Rosewater. Neither are really given a lot to work with character-wise, but both display a depth which conveys a majority of the film’s tone (both hopeless and optimistic). Especially impressive is Bodnia; even though he’s an expert interrogator, his facial expressions alone tell us he’s not totally convinced he’s doing what’s best for his own country, and perhaps even has a certain amount of respect for Bahari.

As for Stewart’s directorial debut (he also wrote the screenplay, based of Bahari’s book), Rosewater is a predictably earnest film from someone using his media status (and ideals) to depict recent events as he sees them. He may have even had a personal stake in the story, given The Daily Show’s role in Bahari’s incarceration. But ultimately, Rosewater is a movie which (inadvertently?) instills a sense of hope in the viewer, even though nothing has really changed since.

EXTRAS:
Featurettes: Iran’s Controversial Election; The Story of Maziar Bahari; Real Spies Have TV Shows; What Happens in New Jersey; A Director’s Perspective (It should be noted that each of these featurettes are less than a minute long)