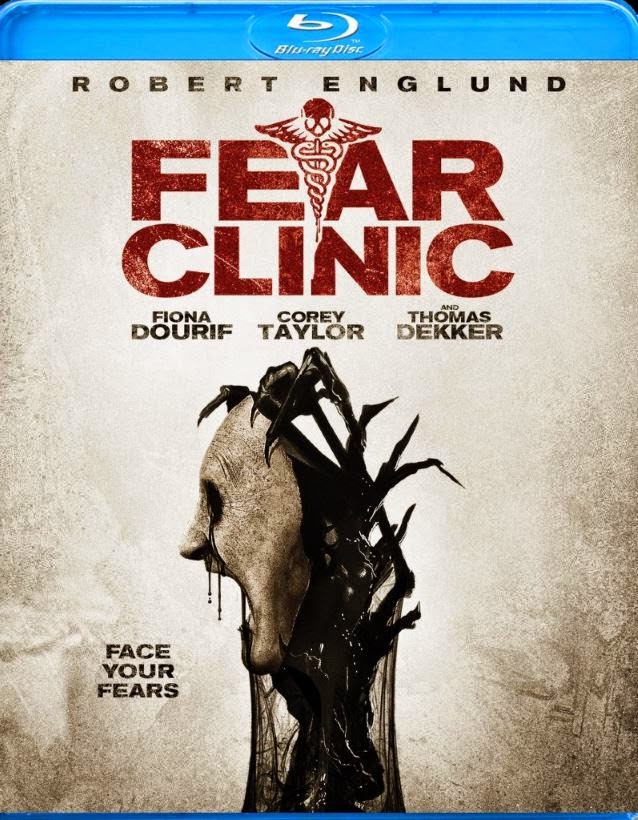 Kind of an oddball cast for this one. There’s Robert England, of course. No surprise, since federal law has required him to star in every direct-to-video horror movie made since 1984. Then we’ve got Corey Taylor, he of Slipknot/Stone Sour fame, Fiona Dourif (looking disturbingly like her father, Brad) and Angelina Armani, best-known for her porn career (and yeah, we get a glimpse of those talents here). Thrown-in for good measure are NFL wide receiver Terrell Owens’ ex-fiance (Felisha Terrell) and a professional contortionist (Bonnie Morgan, with a glimpse of her talents as well). These folks and several others come together for Robert Hall’s scattershot opus, Fear Clinic.

Admittedly, I’ve never seen the original web series on which this is based, which is okay since England (as phobia expert Dr. Andover) brings us up-to-speed right away. Andover developed a “Fear Chamber,” sort-of a depravation tank which can cure patients of their phobias. Since then, some of the patients he initially cured have had extreme relapses, exacerbated by an incident at a local diner, where a masked shooter killed six people. They return to the clinic in hopes of being treated again, but Andover is reluctant, since one patient’s death in the chamber has him suspecting a malevolent force is at work here. It turns out he’s right…the fear chamber has opened the door for a nasty beast which feeds off people’s fear, and doesn’t appreciate being deprived of its meals.

The plot is only slightly-more cohesive than films like Phantasm, mostly serving as a clothesline on which to hang a variety of surreal, FX-heavy set-pieces. Some of them are effectively disturbing and grotesque. Others don’t really make a hell of a lot of sense within the context of the story, but that’s not always a prerequisite for a film in which the visuals are the main attraction. Speaking of which, the special effects run hot and cold. For every nasty, butt-puckering ‘body horror’ scene, there’s another undone by clumsy CGI. But perhaps the most horrifying images don't involve special effects at all... Robert Englund’s nude scenes. Maybe it’s me, but there’s something inherently wrong with any movie in which a 67-year-old man has more onscreen nudity than the young porn star in its cast.

None of these characters are especially memorable, but the performances are decent overall. As a heavy metal fan, I was especially curious about Corey Taylor. While he probably won’t be taking home an Oscar anytime soon, he doesn’t embarrass himself either (and his band, Stone Sour, provides an absolutely killer version of Metal Church’s classic, “The Dark,” which plays over the end credits).

Though ambitiously made on a low budget, Fear Clinic is one of those horror movies where the sum doesn’t equal its parts. Some disturbing imagery and a few wince-inducing scenes - aimed squarely at the gag reflex - help one overlook some of its narrative shortcomings. The end result is a film which is moderately entertaining on a visceral level, but nothing truly memorable.

EXTRAS: Fear Clinic - Behind the Scenes