THE BLACK HOLE and the Borgnine Action Figure 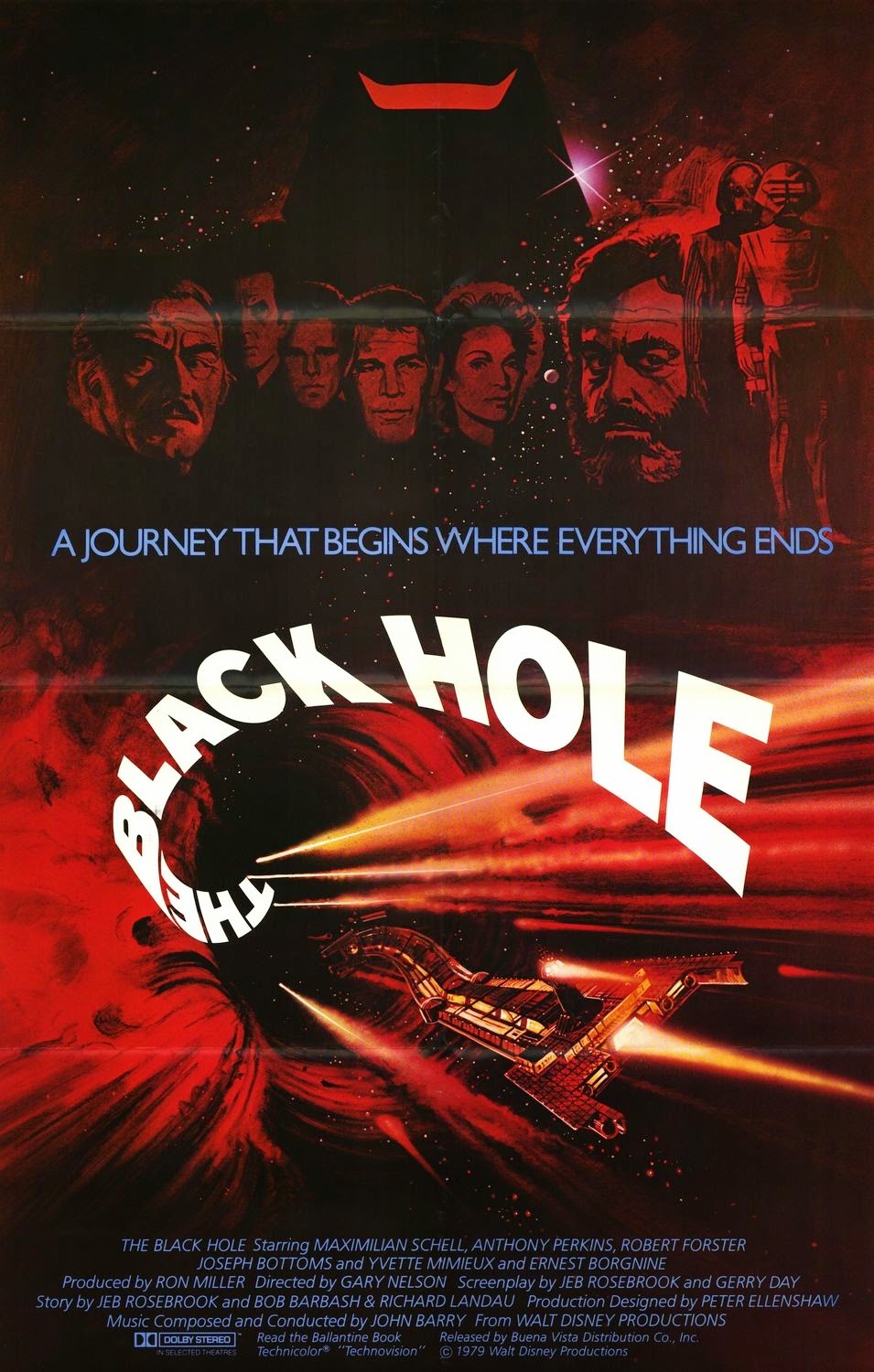 The Black Hole was Disney’s ambitious attempt to shed their kid-movie image and get a slice of the Star Wars pie, going so-far as to put out a similar line of tie-in merchandise (officially making this the only film in history to inspire an Ernest Borgnine action figure).

It was also Disney's first film with a PG rating, probably a conscious decision on their part because 'G' was fast-becoming the box office kiss-of-death. While The Black Hole has some of the same ingredients as Star Wars - even a couple of “cute” robots - it’s obvious that most of the effort was put into marketing, visual effects and production design. Everything else - the story, the acting, the leaden pace, the dialogue, the logic - is so laughably bad (yet soooo dead-serious) that The Black Hole manages entertain by virtue of its sheer awfulness.

The story itself is sort of a reworking of Disney’s own 20,000 Leagues Under the Sea, only without a killer squid to liven things up. The small crew of the Palamino, a deep space explorer, comes across the largest black hole ever encountered (we know this because a robot tells us it‘s “the largest black hole ever encountered”). Perched dangerously near this massive vortex, to their amazement, is the Cygnus, a gigantic vessel launched from Earth 20 years ago and assumed to be lost. After docking with the Cygnus, the crew discover Dr. Hans Reinhardt (Maximillian Schell), a renowned  scientist and the only survivor of the original crew. He claims he ordered his crew to abandon-ship after the Cygnus was damaged, but in reality he had them all lobotomized and dressed 'em up like extras from a goth metal music video so they would do his bidding (the same thing that happened to the entire cast when their agents signed them up for this).

Protecting Reinhardt and his ship are sentry robots, who stagger around like wind-up toys and couldn’t hit the sky with a machine gun. If you thought the stormtroopers in Star Wars were bad shots, these guys will redefine the term for you.

Reinhardt's insane plan is to fly the Cygnus into the black hole in search of “the ultimate knowledge.” Like most folks who appear to be a few cans short-of a six-pack, this is a half-assed plan, since he doesn't seem to have a clue what he's even looking for. Understandably, most of the crew of the Palamino (Robert Forster, Joseph Bottoms, Yvette Mimiuex, Ernest Borgnine) want no part of this. The one exception is Dr. Durant, which should come as no surprise since he's played by Anthony Perkins (channeling his inner-Norman Bates for the umpteenth time). He's immediately so enamored by Reinhardt's radical genius that we half-expect him drop to his knees at any given moment and blow the guy.

That’s pretty much the story, which gets increasingly dumb as it goes along, with hilarious lapses in logic even a five-year-old can notice. For example, the ship’s hull is breached during a meteor shower (the coolest scene in the whole movie), but not only do our heroes avoid being sucked out into space (though the attacking robots do), they are still able to run, talk and breathe. Adding to the fun is some really stupid “techno” dialogue, such as when Perkins’ character announces he’s “activating the micro-beam,” when all he’s actually doing is turning on the ship’s lights, not-to-mention the lame attempts to make Joseph Bottoms another Harrison Ford (sorry, Joseph, but you simply look too much like an accountant to ever be mistaken for a gun-totin' space jock). The only really cool character is the evil robot, Max (looking like the front-end of a Chevy Camero), mostly because he doesn’t talk. No one else in the film ever shuts up.

Despite the admittedly dark tone of the story, the appearance of “cute” robots (voiced by Roddy McDowell and Slim Pickens) will quickly remind everyone watching they’re still watching just another corny old Disney film (with a few “hells” and “damns” tossed in), not the next Star Wars. The climax itself, when they enter the black hole (if you consider this a spoiler, you haven't been paying attention) is either awe-inspiring or unintentionally hilarious, depending on how many other 'cerebral' sci-fi films you've seen in the past. Sometimes cerebral is just an eloquent way of saying, "We didn't know how to end it."

As for the much-touted visual effects... they range from admittedly spectacular (the Cygnus is indeed impressive, as is it’s destruction by the meteor shower) to laughably clumsy; you can actually see the wires tethering the actors to simulate a weightless environment, and when the Cygnus finally does enter the black hole, it looks like it’s being flushed down a massive galactic toilet. But all these liabilities are also what makes The Black Hole a real hoot. It may not be the Star Wars Disney was hoping for, but it's undoubtedly a classic of bad cinema.

Regarding The Black Hole tie-in toys which graced shelves of Toys 'R Us for approximately 12 minutes back  in 1979...at least the basic concept of Star Wars allowed you to use your imagination to create new adventures with your Luke, Han, Leia and Vader action figures. But what exactly did Disney think kids were gonna do with a mustached Harry Booth doll? I imagine anyone who got one of these in their Christmas stocking that year was akin to asking Mom to bring home Oreos from the grocery store, but she returns instead with Fig Newtons.

Still, I truly wish I had one of those Ernest Borgnine dolls. It would be totally cool, if not a bit ironic, to not only own an action figure from a film with virtually no action, but sculpted from the face of one of the least photogenic lead-actors of all time.