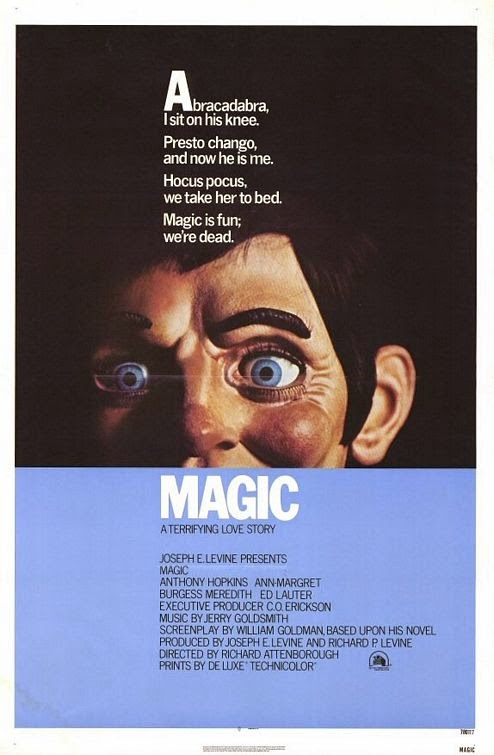 There were three major reasons 1978's Magic was a must-see when I was 14.
First, it costars Ann-Margret. She was my biggest celebrity crush back when most of my peers were ogling Farrah Fawcett. My teen lust may have seemed kinda weird to my friends, especially since she was old enough to be my mother (in fact she was older than my mother), but I didn't care. In the 60s and 70s, the woman was flat-out hot. I only wished the local Spenser's Gifts would have carried a few of her posters along with the Farrah-Fawcetts & Lynda Carters. Such pin-ups probably didn't exist though, because even though Ann-Margret didn't actually appear in that many good movies, she was occasionally taken seriously as an actress, especially after 1971's Carnal Knowledge (which isn't as much deviant fun as the title implies). Still, she was my definition of a woman.
Anyway, when Magic was released in 1978, Ann-Margret was still relatively young, still smokin' hot and starring in a horror movie, second only to disaster films as my favorite genre.
Second, I think ventriloquist dummies are scary as hell...I mean the traditional, old school dummies with bow-ties, giant ears, painted faces and eyes the size of billiard balls that look like they’re trying to suck your soul. Yeah, they’re meant to be humorous little wise-crackers, just like those scary-ass wooden soldier nutcrackers are supposed to be a celebration of Christmas cheer. Christmas in Hell maybe.
Ventriloquist dummies have been subjects of horror on numerous occasions. One of the greatest Twilight Zone episodes was a psychological mind-fucker featuring Cliff Robertson as tortured artist whose connection to his own puppet creation has you wondering who is controlling who. Earlier still was a British anthology film, Dead of Night (1945); its final chapter features a ventriloquist who thinks his dummy is alive. And although much of the rest of the movie seems kind of quaint today, that last chapter is still terrifying.
This means I'm not the only one who thinks these freaky-ass puppets are inherently scary. What's truly unsettling about them is, unlike Chucky from the Child's Play series, they don't simply go on a killing spree...their ultimate goal is to control you.
The third and final reason that made Magic a must-see was the teaser trailer that kept popping up on TV back then. It featured nothing but a creepy-ass rhyme spoken by Fats, the dummy from the film:


It’s a great ad, made during a bygone era when promoting a film didn’t always involve giving a clue to what the story was about. What it did was make the movie look a hundred times scarier than it actually was (which I suppose was the point). Deceptive? Sure, but the trailer was still artistic and very clever.
Teasers today don’t really tease an audience. They present the movie like Denny’s presents the food on their menu; all you gotta do is look at a picture and know what you’re gonna get. Seeing what your plate is gonna look like, as opposed to endless adjectives describing the ingredients, simply makes ordering a lot easier. Same with modern movie trailers. The Transformers movies may suck total shit (and if you don’t agree, wait a few years and watch them again as free-thinking adult), but at least the trailers leave absolutely no mystery to what ticket buyers can expect. And with admission prices being what they are today, moviegoers want a guarantee they’ll like what they‘re paying ten bucks to see. With the cost of most movies, I truly do understand why modern trailers practically give away every single plot point.
Still, there’s something to be said about not laying all your cards on the table. Back in 1977, the teaser for Close Encounters of the Third Kind offered absolutely no plot details or visual effects. Most of us intrigued enough by the trailer to catch the movie in theaters were absolutely blown away by the appearance of the mothership during the climax. We had no idea it was coming, a wonderful, jaw-dropping surprise.
Then there’s Magic, starring Anthony Hopkins and Ann-Margaret. It was directed by Richard Attenborough (director of numerous films people claim to love because they think they are supposed to, but best-known as the billionaire grandpa in Jurassic Park), and written by William Goldman (Butch Cassidy and the Sundance Kid, All the President’s Men & The Princess Bride). The plot’s more-or-less the same as the aforementioned puppet-horror flicks, only with a lot more talent & cash behind it.
Yet, Magic isn’t really that scary. When I finally saw it, I felt like I’d been duped, even though Ms. Margret looked as fine as ever. The movie’s okay, and maybe just a little creepier today now that Anthony Hopkins has become part of our cultural consciousness as Hannibal Lector. But there’s nothing in the film nearly as terrifying as Fats’ evil grin and creepy-ass rhyme from the trailer. But as much as the ad scared me, my kid sister was so freaked out that she had to leave the room whenever it showed up on TV.
Being that it was in my job description to torment my sister whenever possible, I had the bright idea to record the commercial with my cassette player, sneak into her room while she slept, stick it under her bed and crank up the volume. A buddy of mine, Rick, who was sleeping over that night, also suggested waiting until she awoke to Fats’ voice and throw a Charlie McCarthy doll at her. And I agree, that would have been awesome, save for the fact I didn't have a Charlie McCarthy doll because no child in history has ever fucking wanted one.
Anyway, we snuck into her room at two-in-the-morning and played the tape, which didn’t go quite as planned, mainly because, even though she was my sister, she wasn’t a complete idiot. Audio technology was still in the dark ages back then, and recording directly from the TV speaker made Fats sound like he was manning a Burger King drive-thru window. It didn’t help that me and Rick were loudly snickering just outside her room, impressed with our own cleverness. She didn’t scream or piss herself like I’d hoped. She did, however, grab the tape recorder and threw it at us. It put a dent in the wall, which I ended up having to pay for with several weeks’ worth of allowance.
The film may have been disappointing, but Magic still boasts the scariest movie trailer of all time. And after revisiting it all these years later, I'll probably have to sleep with the lights on again.
Posted by D.M. Anderson at 5:08 PM