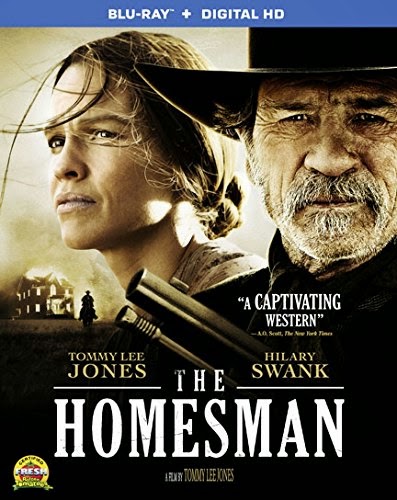 I’ll say this up front…The Homesman is an impeccably-crafted movie, loaded with outstanding performances, rich characters, challenging themes and haunting imagery (some scenes will linger with you for days, whether you want them to or not). Once again, Tommy Lee Jones demonstrates he’s just as skilled behind the camera as he is in front of it. But admiring a film isn’t always the same as actually enjoying it. As a 'western', The Homesman is relentlessly downbeat, practically wallowing in the misery of its characters and their bleak environment.

In the first act alone, a woman loses all three of her children to diphtheria, another murders her own baby by unceremoniously tossing it into the hole of an outhouse, while yet-another is repeatedly raped by her husband so she’ll pump-out a son. All three go understandably insane, especially in the horrible frontier town where they live with their asshole husbands. Still, crazy is crazy, and it’s decided that these women should be transported back east. An unmarried spinster, Mary Bee (Hilary Swank), ends-up with the task, along with cantankerous & self-centered claim-jumper George Briggs (Tommy Lee Jones), who she saves from being lynched by vigilantes.

That’s essentially The story in a nutshell, a deliberately-paced and depressing journey in which we think the overall theme is the personal journey of one main character, but suddenly turns out to be about the redemption of another. As lovingly-made as it is, The Homesman is an utterly joyless film which may-indeed realistically depict what it was like to be a loyal wife (as well as that of an unmarried woman) during the westward expansion of the 19th Century, but it’s an emotionally exhausting experience, which was probably the whole point all along.

Still, despite all the misery on display, we feel compelled to see it through to the end, simply because it's so well made and the performances are terrific (Swank is at the top of her game, as is Jones, even though he's been a grizzled old cowboy before). But I seriously doubt The Homesman is a journey many would want to take a second time.

It should also be noted that, despite the impressive supporting cast (including Meryl Streep, John Lithgow and James Spader), most of these actors pop-up in little-more than glorified cameos and have little to do with the actual overall story.

EXTRAS:
Three Featurettes: Origins; Behind the Scenes; Beyond the Western