IT'S A WONDERFUL LIFE...Not Christmas-y Enough? 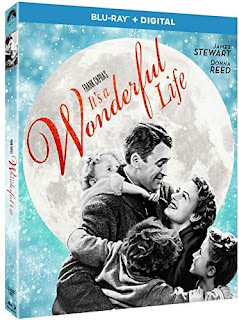 Is It’s a Wonderful Life the greatest Christmas movie of all time? That’s debatable, of course. As holiday classics go, I’m more of a Miracle on 34th Street man, with A Christmas Story coming in a close second. Perhaps it's because those are Christmas movies through and through, the yuletide season being the driving force behind their plots.

In that context, It’s a Wonderful Life doesn’t quite qualify. To elaborate, my oldest daughter, Natalie, eats, lives and breathes Christmas throughout the year (taking a brief respite during January in honor of her birthday). She’d heard of It’s a Wonderful Life and was happy to join me while I reviewed this disc. However, Natalie ended up calling it quits after about an hour. Not that she hated the film, but it wasn’t “getting Christmas-y” fast enough.

In a way, Natalie has a point. Without delving into specifics of a story most of us are familiar with anyway, Christmas doesn't even figure into the plot until the final act. Until then, It’s a Wonderful Life is a series of flashbacks of George Bailey’s (James Stewart) tumultuous life, as viewed by his guardian angel in preparation for preventing George from killing himself. In fact, much of the film is actually pretty downbeat. But as anyone who’s seen it knows, the preceding scenes of financial hardship and clashes Mr. Potter (Lionel Barrymore) are what make George’s newfound appreciation for life – on Christmas Eve - so inspiring.

So while it may not get to Christmas fast enough for Natalie’s liking (much like real life), It’s a Wonderful Life is still quintessential Frank Capra, which of course means it’s...well, wonderful. Imitated but never duplicated, the film’s themes and imagery remain as timeless as ever. And it has never looked or sounded better than it does with this wonderfully-restored Blu-ray from Paramount, which also includes a smattering of interesting - and brand new - bonus features.

EXTRA KIBBLES
FEATURETTES - “Restoring a Beloved Classic” (includes a lot of before/after comparisons and interviews with those at Paramount in charge of the restoration); “Secrets from the Vault: It’s a Wonderful Life” (contemporary filmmaker-historians discuss Frank Capra and the story behind the film); “It’s a Wonderful Wrap Party” (home movies of the cast & crew picnic).
COLORIZED VERSION – On Disc 2...but why bother?
DIGITAL COPY
KITTY CONSENSUS:

MEE-OW! LIKE ATTACKING THE CHRISTMAS TREE.
Posted by D.M. Anderson at 9:32 PM