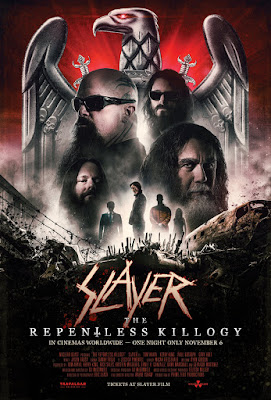 SLAYER: THE REPENTLESS KILLOGY in Theaters Worldwide on Nov. 6
Slayer - Tom Araya, Kerry King, Gary Holt and Paul Bostaph - along with Trafalgar Releasing, Nuclear Blast Records and Prime Zero Productions, are pleased to announce the upcoming release of the new short narrative film and concert, Slayer: The Repentless Killogy, coming to cinemas worldwide for a one-night event on November 6. Due to be screened in over 1,500 cinemas around the world, tickets will be on sale from October 9 from Slayer.Film.

Revenge, murder, bloodshed and retribution. The Repentless Killogy film was written and directed by BJ McDonnell, who conceived and directed the three brutal music videos - “You Against You,” “Repentless,” and “Pride in Prejudice”- for Slayer’s final studio album Repentless (2015).

“When we set out to do these initial three videos,” said McDonnell, “our intention was to continue the saga of Slayer and Wyatt at some point down the line. But this is the band’s final album and world tour so this story, the three videos and the “Repentless” live concert at The Forum, is a perfect way to wrap up. This is the end of the monsters.”

Uncompromising and unmissable, part one of Slayer: The Repentless Killogy begins with the powerful short narrative film that brings together the music of Slayer and the grisly story they wanted to tell.  Opening with the trilogy of music videos assembled as one chronological storyline, we are introduced to the narrative’s main character Wyatt, a former Neo Nazi associated with a gang known as “The Hand Brotherhood,” whose signature mark was a bloody handprint left after a murder had taken place.


ANGEL HAS FALLEN on Digital 11/12 and 4K, Blu-ray & DVD 11/26
When there is an assassination attempt on U.S. President Allan Trumbull (Morgan Freeman), his trusted confidant, Secret Service Agent Mike Banning (Gerard Butler), is wrongfully accused and taken into custody. After escaping from capture, he becomes a man on the run and must evade his own agency and outsmart the FBI in order to find the real threat to the president. Desperate to uncover the truth, Banning turns to unlikely allies to help clear his name, keep his family from harm, and save the country from imminent danger.
Posted by D.M. Anderson at 10:09 AM