HOUSES OF HELL: There Goes the Neighborhood 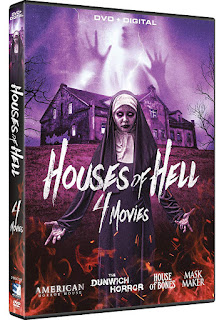 This DVD set from Mill Creek Entertainment collects a batch of derivative haunted house thrillers. Like other recent collections, all four films come courtesy of Active Entertainment, long-time purveyors of SyFy Channel schedule fillers. As usual, each features a recognizable face or two showing up to pay the bills, and if expectations are kept in check, a couple of them are sort-of enjoyable.

American Horror House is probably the best of the lot, which still doesn’t make it all that great, but at-least it appears to be trying. The basic premise is decent, though it’s ultimately a supernatural slasher film punctuated by some nifty death scenes. House of Bones trucks out every haunted house trope in the book, with the added bonus of Corin Nemic, whose goofy performance suggests he’s well-aware this ain’t exactly The Haunting. Still, the movie’s kinda fun.

On the other hand, The Dunwich Horror, another adaptation of H.P. Lovecraft’s story, is a colossal bore that wastes the talents of cult legend Jeffrey Combs. Finally, Mask Maker is more-or-less a Friday the 13th knock-off with a batch of obnoxious college kids providing the body count. Some familiar character actors pop-up here and there (what were you thinking, Treat Williams?), but gory kills are its only virtue.

Unless you’ve never seen a horror movie in your life, all four of these films are predictable to a fault and virtually fright-free. Still, House of Bones and American Horror House are watchable enough. The other two are strictly for undiscriminating die-hards.