3 FROM HELL Brings the Pain...Again 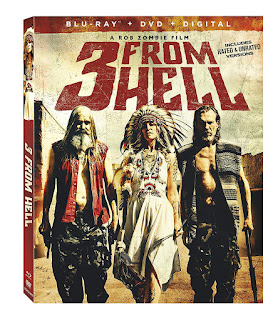 I’ve always been a Rob Zombie fan, though never really cared for most of his movies. I get what he’s doing – parlaying his love of the same sleazy horror he embraces in his music – and he’s actually a pretty skilled director. But he also tends to overindulge in excess for its own sake.

For me, The Devil’s Rejects was an exception. Not that Zombie backed away from the usual mayhem and parade of sideshow freaks, but this time his over-the-top style completely suited the story. While still an homage to the grindhouse aesthetic of the ‘70s, it was more than just the sum of his influences. The murderous Firefly family may have been introduced in House of 1,000 Corpses, but Rejects is when they got interesting.

Though one would assume the climax of that film precludes any notion of a follow-up, Otis, Baby and – very briefly – Captain Spalding return for more nastiness in 3 From Hell, Zombie’s belated sequel. It turns out that even though each was shot more than 20 times, they were only mostly dead (to coin a phrase). Sure, their resurrection is contrived and health issues relegate the late Sid Haig to a mere cameo, but while 3 From Hell does not reach the heights – or depths – of The Devil’s Rejects, it’s arguably Zombie’s best film since.

3 From Hell is essentially divided into two stories. Following Spalding’s unceremonious exit (by execution), the first half has Otis (Bill Moseley) escaping prison with the help of half-brother “Foxy” Coltrane (Richard Brake). A massive manhunt ensures, during which time these two force sleazy warden Dallas Harper (Jeff Daniel Phillips) to break Baby (Sheri Moon Zombie) out of jail by holding his wife and friends hostage. Afterwards, the three hole-up in a seedy Mexican village. This sets-up the second half, in which druglord Aquarius (Emilio Rivera) seeks to avenge the death of his father, Rondo (Danny Trejo), who was murdered by Otis during his escape.

Spread throughout is all the sadism, murder, blood and flamboyant performances that have become hallmarks of this franchise. Zombie’s penchant for ugliness is on full display and he skillfullly maintains the same greasy look and tone of The Devil’s Rejects. However, 3 From Hell doesn’t really bring anything new to the table. It’s another film of bad guys squaring-off against worse guys, which is perfectly fine if more-of-the-same is what you’re looking for. Spalding is also sorely missed. “Foxy” Coltrane is obviously introduced to keep this group a trio, but he’s not as interesting and Richard Brake is no Sid Haig. Additionally, Sheri Moon’s “look how insane I’ve become” performance grows irritating after awhile.

But while there aren’t any real surprises, 3 From Hell is seldom boring, the worst sin a movie can commit, good or bad. Like The Devil’s Rejects, it’s fast-paced and unquestionably horrific (though I still don’t understand how either are considered horror films). Storywise, Rob Zombie hasn’t figured out anything new to do with his characters, but it more than justifies his ongoing second career as a director.