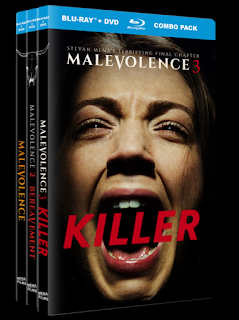 Ever since the original was released in 2004, grassroots auteur Stevan Mena has more-or-less been in the Malevolence business, which chronicles the violent misadventures of Martin Bristol, a serial slasher not unlike Michael Myers. Like most franchises, the quality of these films vary and, depending on the viewer, are either respectful homages or blatant rip-offs. Originally released years apart, all three are now on Blu-ray from Mena himself.

MALEVOLENCE (2004)
Starring Samantha Dark, Brandon Johnson, Heather Magee. Directed by Stevan Mena. (89 min)
Considering it’s an utterly derivative & predictable slasher film, Malevolence is a better movie than it has a right to be. Writer-director Stevan Mena approaches the material as though he originated every trope in the genre. But he does it with so much sincerity, without a whiff of irony, that it's hard not to be impressed. The plot is standard slasher fare... after a bungled bank robbery attempt, three felons escape to rendezvous at an abandoned old house out in the boonies. Though the place is secluded, they are not alone. It ain’t long before a masked lunatic is stalking the area. A flashback prologue gives away its climactic revelation to all but the most simple minded viewers, but the story unfolds like it’s still a great mystery. Getting there, however, is half the fun. What Mena may lack in originality, he more than makes up for with style and pacing, which makes this relatively cheap film look and feel like it’s much more than the sum of its parts.

MALEVOLENCE 2: BEREAVEMENT (2010)
Starring Alexandra Daddario, Michael Biehn, Peyton List, John Savage. Directed by Stevan Mena. (111 min)
The best of the three, Malevolence 2: Bereavement is a prequel that shows us how young Martin Bristol grew up to be the killer from the original, under the tutelage of zealous loony, Graham Sutter, who sacrifices young girls while spouting his own brand of religious babble. Horror origin stories are almost never necessary - their very nature precluding any question of how things will end – and this one is no exception. But in addition to some holdover slasher elements is an aesthetic more akin to The Texas Chainsaw Massacre. Again, writer-director Mena wears his influences proudly, achieving a suitably bleak tone and making great use of stark midwest locations. He’s also aided immeasurably by a better cast that includes Alexandra Daddario in the lead, as well as Michael Beihn and John Savage in supporting roles.

MALEVOLENCE 3: KILLER (2018)
Starring Katie Gibson, Kevin McKelvey, Ashley Wolfe, Jay Cohen. Directed by Steven Mena. (88 min)
I don’t know what happened between 2010 and 2018, but this plays like Mena has lost interest in his own franchise. Malevolence 3: Killer is a tired rehash of every teen slasher flick that ever oozed out of the 80s. Picking up immediately after the events of the first film, Martin Bristol stabs his way through a variety of college kids. But unlike those in Malevolence, these characters are walking cliches, as are the jump scares and Mena’s own Carpenteresque score. With the exception of Kevin McKelvey as a dedicated agent and an all-too-brief cameo by Adrienne Barbeau, the performances are strictly amateur night. Working with a script as lazy as the title, Mena doesn’t even seem to be trying. Devoid of tension or atmosphere, the entire film feels hastily slapped together. The door is, of course, left open for another sequel, but I suspect even Mena would agree it’s time to move on.

Fans of the franchise will, of course, snap-up all three and won’t be disappointed by the abundance of bonus features included with each disc. For the curious or merely budget-minded, the first two are worth checking out, especially the latter, since it’s the bleakest, bloodiest and best-directed. Skip Malevolence 3 altogether.

EXTRA KIBBLES
Trailers for all three films (as well as a horror-comedy Mena directed in 2007) automatically play at the start-up of each disc. Each film also includes a DVD copy.