THE QUIET ONE Speaks 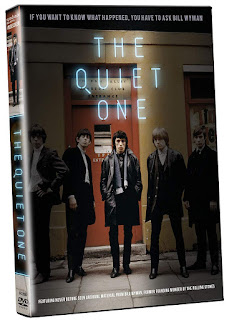 How do you make an interesting documentary about The Rolling Stones’ least interesting member? Director Oliver Murray attempts to overcome that hurdle by introducing Bill Wyman as something of a hoarder.

When we first see him, he’s hunched over a computer like the 82-year-old man he is (though he still looks younger than Keith Richards). During most of The Quiet One’s present-day footage, he never leaves his desk, rarely speaking on camera as he peruses his many collections of photos, videos and...shelves & shelves of impeccably-arranged stuff. It looks like he’s kept everything he’s ever acquired, but least he’s an organized hoarder.

Elsewhere, The Quiet One chronicles Wyman’s life and career through vintage footage, along with interviews with friends and peers (though most of his ex-bandmates are conspicuously absent). Predictably, his tenure with The Rolling Stones dominates the film. Through voice-over narration, Wyman offers his take on their turbulent history, though he never discloses anything really revelatory.

More revealing is his life outside of the Stones, including a periodic solo career I’d wager most people didn’t know he had (after hearing some of his music, it’s understandable). Wyman is also candid about his scandalous – and brief – marriage to 18-year-old Mandy Smith (Bill was 52). Personally, I'd like to know more about all that stuff in his house he thinks is worth keeping.

Ultimately, The Quiet One is a mildly engaging documentary where the most reclusive of the Stones allows us a glimpse of his life, which has been nowhere nearly as crazy as those of Mick or Keith or Brian. Hence, his story isn’t as fascinating, but fans should find it worth their time.