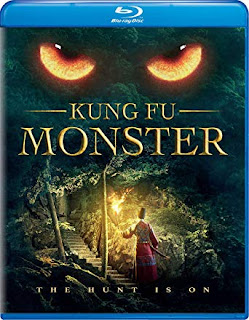 For a movie titled Kung Fu Monster, there’s damn little of either. And that’s the least of its problems.

Though there’s plenty of fighting, it mostly consists of swordplay and a few characters who display unexplained supernatural abilities. A few martial arts mercenaries show up in the first act, but they’re essentially cannon fodder who are easily dispatched by a rolling ball of foliage.

As for the “monster”...if Gizmo from Gremlins and Sonic the Hedgehog ever mated, their offspring might look something like this. At least until it’s pissed off. Then it morphs into something one might see on an ‘80s heavy metal album cover. In either case, the creature is rendered by some of the worst CGI I’ve seen in recent memory. But despite the film's title, 'Gizmosonic' has relatively little screen time.

What really kills the film is the story and its characters. Taking place during the Ming Dynasty, the great Louis Koo seriously slums – or collects a serious paycheck – as Ocean, a warrior who absconds with the evil emperor’s title creature, which he’s supposed to train as a vicious weapon. Instead, Ocean treats it kindly and the two become pals. Meanwhile, the emperor offers a huge reward for whoever can capture them both, bringing a variety of mercenaries out of the woodwork.

This is where things fall apart. Despite the ominous cover art & tag-line (“The hunt is on”), Kung Fu Monster is mostly played for laughs and Koo is essentially the straight-man to a collection of obnoxious buffoons. They bicker incessantly, engage in broad slapstick, deliver dialogue with the subtlety of a mallet and even break into song on occasion. None of it is even remotely funny or entertaining. Worst of all, these scenes are interminable, comprising most of the running time. It’s almost a relief when 'Gizmosonic' finally returns in the final act to remind us the film is supposed to be about a monster. Still no kung fu, though.

Kung Fu Monster reaches a point where it’s actually irritating. This is one of those movies where the cast and crew are clearly having a lot more fun than we are. It might amuse undiscriminating 12-year-olds, but most others will likely be insulted by the filmmakers’ apparent contempt for the audience’s intelligence. A depressing waste of time and talent.

BLEH! LIKE COUGHING UP A HAIRBALL.
Posted by D.M. Anderson at 9:35 PM