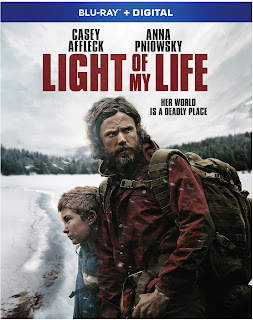 Review by Fluffy the Fearless😿

Based on his onscreen persona, Casey Affleck could possibly be the most miserable guy on the planet. I don’t recall the last time he played someone who wasn’t the walking definition of melancholy. But hey, it won him an Oscar, so I guess it’s working for him.

So it should come as no surprise that his first film as a writer-director would be conducive to his attributes. Light of My Life is a relentlessly gloomy post-apocalyptic drama in which a plague has killed almost every female in the world and civilization is more-or-less in shambles. Affleck is the fiercely-protective father of a young daughter, Rag (Anna Pniowsky), who he disguises as a boy for her own safety.

A majority of the film has them trekking through the stark, cold wilderness, occasionally finding abandoned homes for temporary shelter and only venturing to populated areas when necessary. Most of what we learn about these two – as well as the cataclysmic plague – come through conversations when they’re alone together. Rag has a lot of questions, mostly about human nature, some of which Dad can answer, others he can’t. He is also increasingly aware that as she approaches womanhood, it will increasingly difficult to keep up their ruse.

Very similar in concept, tone and pace to The Road, Light of My Life is relentlessly bleak and pessimistic, the only respites from the constant despair being Dad & Rag’s bedtime stories. In fact, the opening 10 minutes in which he puts his spin on the tale of Noah’s Ark is about as sunny as things get. Elsewhere, the narrative advances very slowly, which is effective when showing how society has pretty-much come to a stand-still.

However, there are long stretches where nothing really happens. Affleck’s typically laconic performance suits the mood and young Pniowski is a revelation, but aside from a few flashbacks, we learn little about these characters. That might be deliberate, but misery for misery’s sake can be a challenge to endure without more personal investment in who’s doing the suffering.

Still, Light of My Life is well made and, despite its languorous pace, comes to genuinely suspenseful, unexpectedly violent climax. Affleck also makes good use of locations to paint an effectively dreary picture, sort of reshaping the world as an extension of his own image. It definitely feels derivative of The Road, but if that film gave you hankering for more hopelessness, here’s a second helping.