THE LION KING and the Shiny Penny 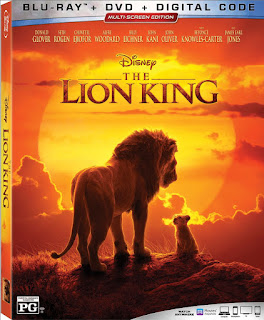 Did The Lion King need to be remade? Of course not, but you can say that about any movie.

However, this one isn’t simply a remake. As nearly everyone already knows by now, it’s almost the exact same film, right down to the songs, music score, title card, jokes, dialogue and iconic scenes (many of which are shot at identical angles or perspectives). James Earl Jones even returns to voice Mufasa. The only significant difference is the animation...CGI and motion-capture that makes everything (mostly) look like live action.

My initial reaction was that this version might be as redundant as Gus Van Sant’s misguided scene-for-scene remake of Psycho. Why crank out the same thing when the original was not-only groundbreaking, it remains culturally relevant decades later? Even though I’m a middle-aged curmudgeon who remembers – and often misses – the days of traditional hand-drawn animation, I certainly understand the aesthetic appeal of computer animation...as long as it still looks like animation.

The family dog notwithstanding, animals ain’t all that expressive, so by designing the characters in the new Lion King to be as realistic as their counterparts in the wild, their personalities are severely muted, as is our emotional investment in them. That also makes it pretty tough for the exact same dialogue, jokes and songs to go over as effectively as they did 25 years ago, despite an impressive cast (though Seth Rogan, voicing Pumba, comes close).

A few new wrinkles are sprinkled-in here and there. How Rafiki learns Simba’s still alive is creatively amusing (like anything involving dung beetles) and the hyenas have a few more chuckleworthy scenes. But most of the added material is inconsequential. Other than that, this is the shiny penny version of The Lion King you grew up with.

But people like shiny things, and in that respect, The Lion King admittedly hits a home run (and is therefore not as redundant as Psycho). The animation is meticulous, an astounding amount of detail poured into every shot. It’s a technological wonder and the imagery alone makes it worth checking out at least once. Director Jon Favreau and his crew of computer nerds may not have added anything significant to the narrative, but visually, they’ve certainly taken what they learned from The Jungle Book and amplified it tenfold.

For a lot of viewers - kids especially - the eye candy may be enough, perhaps even preferable to the barbaric methods used to animate critters back in the ancient ‘90s. Since the story itself is bereft of any surprises whatsoever, The Lion King is obviously intended for those who enjoy paying to have their cars detailed: It’s still the same old vehicle, but for a brief time, you feel like you’re driving a shiny new set o’ wheels.