THE LINGERING: Hey...Wait a Minute... 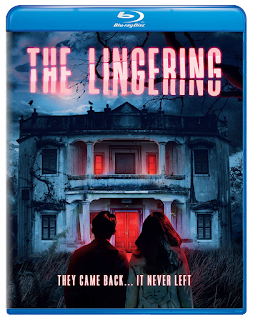 The ending of The Lingering vexes me. I’m stating this up-front because it’s a major bone of contention in an otherwise decent haunted house thriller. To explain further would provide a major spoiler to what’s obviously meant as a twist ending. However, unless I missed something, this resolution undermines the entire movie.

Until then, though, The Lingering is an atmospheric little film that initially has the viewer thinking it’s gonna be your standard bump-in-the-night spookshow, but takes a surprising narrative turn early on. It opens with a mother and her son, Dawa, waiting for the father to return home from work, which doesn’t happen because he died on the job. Meanwhile, the usual oddities start to occur – self-winding toys, photos dropping from wall, etc. - and everyone’s sure it’s his ghost.

Then suddenly, that storyline is dropped altogether, never to be mentioned again. It’s now 30 years later and Dawa’s all grown up with a rich girlfriend. He gets the news is mother has died and is forced to return to the childhood home he hasn’t visited since leaving – on bad terms – years before. Dawa considers selling the house to fund his restaurant, but has second thoughts when it appears to be haunted by his mother.

Despite the jarring shift in the story’s focus, The Lingering is mostly enjoyable and the characters are well-drawn. What we learn of Dawa and his mother’s disintegrating relationship – through flashbacks and letters – gives the film a climax that packs an emotional wallop. And had everything ended at that point, there wouldn’t be a dry eye in the house. Instead, we get another revelation that not-only defuses the poignancy the film worked so hard to achieve, it doesn’t make any narrative sense. Some viewers might find themselves saying, "Hey...wait a minute...how's that possible?"

Again, going into further detail would spoil the party. Besides, The Lingering is still worth checking out for the effectively creepy moments, all-around dark tone and sympathetic characters. If only it knew when to quit.