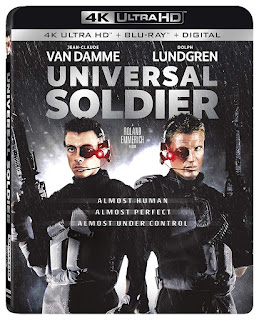 Back in 1992, Universal Soldier was just another dumb sci-fi-action flick riding the coattails of bigger and better films (most notably, the Terminator franchise). Sure, it was a pretty big hit and spawned several sequels of varying quality (mostly on the shitty side), but was destined to be forgotten by all but the staunchest Jean-Claude van Damme disciples. Superficially revisiting the film 27 years later might confirm that it’s little more than an archaic product of its time.

But while Universal Soldier is hardly a milestone, it does have some noteworthy historical importance. The film has-since become something of a cult classic over the years, as the aforementioned slew of sequels will attest. And on closer inspection, consider this:

This is the first teaming of Roland Emmerich and Dean Devlin, who’d obviously go on to much greater things. If not for their initial success with Universal Soldier, we may not have gotten Stargate, Independence Day or The Day After Tomorrow. That would have been a shame. Even with a comparatively low budget, the duo’s penchant for over-the-top spectacle is apparent.

Universal Soldier was also Jean-Claude van Damme’s first film with enough cross-over appeal to rank him – however briefly – among action A-listers. Not only did he demonstrate he was capable of more than roundhouse kicks, the best films of his career (Hard Target, Timecop) followed right afterwards.

And just prior to becoming a household name with Law & Order, the late, great Jerry Orbach shows up in a brief-but-pivotal scene. The film’s alternate ending – included in the bonus features – reveals his character as a villain, sort-of a rarity on his resumé.

But the real rediscovery is Dolph Lundgren, who’s never been taken too seriously. Looking back at his performance in Universal Soldier might just suggest he’s always been a bit been underused. I wouldn’t go as far as to say he was overlooked during Oscar season, but Lundgren’s actually quite good here, and not just when he’s snapping limbs. Given the opportunity, he’s capable of some prime scenery-chewing and is easily the best part of the entire film. Unfortunately, no one appeared to appreciate his efforts because Universal Soldier is, so far, the pinnacle of his career.

Though certainly quaint compared to what passes for action today, Universal Solder remains a fun film, perhaps a bit more historically significant than previously credited for. Of course, whether or not it’s worthy of the 4K upgrade treatment depends on one’s lasting reverence for it. Though bereft of any new bonus features, Lionsgate has given the film a pretty impressive video facelift. The audio transfer, however, is nothing to write home about.