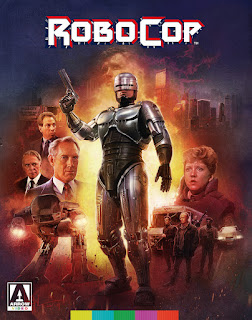 I remember first seeing the trailer for Robocop and thinking, Wow, that looks really dumb. Even the title suggested something along the lines of Megaforce or Battletruck. Then a few buddies who’d already seen it dragged me kicking and screaming to a local drive-in, touting “You gotta see this!” and “It’ll blow you away!”

The second time I watched it was on video, when I told a few other buddies, “Hey, you gotta see this! It’ll blow you away!” The action and gung-ho violence was as rousing as ever, but this time I noticed how genuinely funny it was. Often because of the over-the-top violence, but also its pitch-black sense of humor and plethora of surprisingly hilarious - and quotable - dialogue.

Of course, I later bought it on DVD because it more-than-warrants repeat viewings. Like a lot of fans, critics and film scholars, I came to the conclusion that RoboCop is ultimately a rare work of demented genius under the guise of an ‘80s action film (but has aged far better than nearly all of ‘em). In fact, it ultimately defies single genre classification, successfully combining traditional science-fiction, horror, classic tragedy, dark comedy, sharp satire, cultural commentary and, of course, good old fashioned revenge, all of which are as timely today as they were 32 years ago.

If that ain’t the definition of a modern classic, I don’t know what is.

I spent an entire Saturday evening reviewing this new limited edition Blu-ray from Arrow Video, and that’s before actually watching the three cuts of the film that are included. These two discs are loaded with so many new and vintage bonus features (in addition to a booklet the length of a novella) that I was simply too damn tired to fire-up the movie itself until Sunday morning. I was intrigued enough by the inclusion of the edited-for-TV cut on disc two to start there (the only version I hadn’t yet seen). Originally airing on ABC in the early ‘90s, anyone who’s ever seen RoboCop will concur that it’s about as non-conducive to TV butchery as a movie gets. The result is a truncated hoot, a de-fanged film with expletives substituted with hilariously “safe” dialogue and, of course, shorn of nearly all the violence.

The storied Director’s Cut is also here in all its gory glory. Only dedicated fans could probably differentiate it from the Theatrical Cut without a magnifying glass, but it is the definitive version and the 4K restoration is mostly pretty impressive (save for a few noticeably muddy scenes late in the film). However, the differences are made quite clear by a nifty bonus feature that presents side-by-side comparisons of key scenes (including 20 minutes comparing the original and TV cuts).

Elsewhere, there’s enough supplementary material (outlined below) to keep Robofans busy for hours. Not only does it cover nearly every aspect of the film’s production and impact, a lot of the featurettes are entertaining enough to watch more than once. And I haven’t even gotten to the aesthetic goodies, including some neat stuff my wife has already informed me will not become part of our living room décor.

RoboCop has been released on video plenty of times before, including some editions that were pretty impressive in their own right. But this one is so comprehensive and beautifully packaged that double-dipping should be a no-brainer. Barring something extraordinary happening in December, this is the best Blu-ray release of the year.

In other words, you gotta see this. It’ll blow you away. 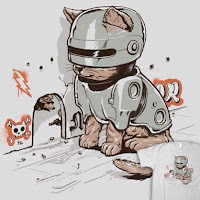 MEE-OW! LIKE TAUNTING A MOUSE TO DEATH.
Posted by D.M. Anderson at 9:12 PM