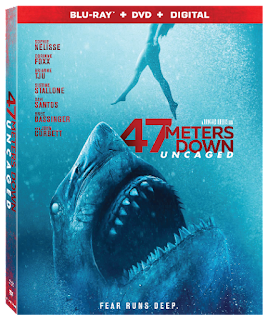 47 Meters Down was a reasonably enjoyable little thriller similar to Open Water and The Shallows, though not as deftly crafted as either. While it didn’t leave much room open for a true sequel, nothing sells like a brand name, so this one takes the same basic concept down the bigger-is-better road...bigger production, bigger cast, bigger body count. But is 47 Meters Down: Uncaged actually better? In some ways, yes it is.

Instead of two terrified teenage girls trapped in a shark cage, we have four who are foolish enough to abscond with some conveniently-placed scuba gear and explore the sunken ruins of an ancient Mayan city. But they are not alone. Trapped down there for centuries have been generations of sharks, long-since rendered bleached & blind from being cut-off from the surface. I guess we aren’t supposed to ask how they managed to survive so long without a food source. Or maybe dumb kids simply pop-in on a regular basis.

Speaking of dumb, one big reason Uncaged is fun is because writer-director Johannes Roberts incorporates a few conventions generally associated with disaster movies, such as the access cave collapsing, or better yet, that one stupidly-reckless character whose actions not-only endanger everyone in the first place, her own egocentric sense of self-preservation repeatedly sabotages their chances to escape.

That character is Nicole, played by Sistine Stallone (yeah, Sly’s daughter). She leads the charge into the cave, is the reason they get stuck and ends up causing people to die. Watching this with my daughter, there reached a point where we’d start shouting “Way to go, Nicole!” However, since no one else has any real personality, she’s also the most entertaining character in the film...besides the sharks, that is.

While the concept – trapped underwater with a finite amount of oxygen – is similar to the first film, the setting of Uncaged is more interesting. With these characters swimming through increasingly deep & narrow passageways, there are some moments nearly as claustrophobic as those in The Descent. Ironically, the tension created by those scenes is often broken by the appearance of the sharks, which are predictably rendered with unconvincing CGI. In fact, one could even argue it might have been a better overall film without them.

But while credibility is often pushed to the breaking point – wait'll you see the climax! - 47 Meters Down: Uncaged is generally more silly fun than the original (which took itself a little too seriously). A brisk-pace, nifty setting and a few amusing critter kills (bye-bye, Nicole!) make some of the “oh, come on!” moments a little more forgivable.