OPERATION CROSSBOW: In Search of Sophia 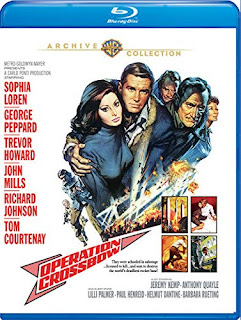 One thing is certain: Sophia Loren sure loved her husband, producer Carlo Ponti. She obviously agreed to appear in Operation Crossbow to help him boost its marquee value. Despite appearing for about 10 minutes in an inconsequential role that could have been played by anybody, she’s given top billing over an impressive ensemble cast (none of whom look as striking on a movie poster).

But I get it. It ain’t like George Peppard’s name & face ever had ‘em lining up around the block. He’s the de-facto star of Operation Crossbow, which is loosely based on a mission of the same name that was undertaken near the end of World War II. The Germans are on the verge of obliterating their enemies by developing long range, self-flying bombs. British minister Duncan Sandys (Richard Johnson) investigates and appoints a few agents to assume the identities of Nazi-recruited scientists, then infiltrate the factory in order to alert bombers of its location.

The narrative takes an interesting approach, showing both sides of the conflict. The first half of the film balances Britain’s investigation with Germany’s efforts to perfect their weapons through testing. These two storylines converge when the mission itself gets underway, with John Curtis (Peppard) and Phil Bradley (Jeremy Kemp) gathering intel while German agent Bamford (Anthony Quayle), aware of England’s mission, attempts to expose them. By this time, the lovely Ms. Loren has already come and gone, having no impact on the plot whatsoever.

And that’s okay. Operation Crossbow may indeed have garnered less attention without her, but it’s engaging enough on its own terms. While no classic, it’s directed with workmanlike skill by Michael Anderson, who efficiently juggles concurrent narratives and a large cast to tell a fairly solid story that builds to an exciting climax.