APPRENTICE TO MURDER: Looks Are Deceiving 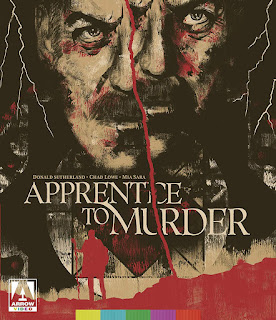 If anything, this is a more of a psychological thriller, and a pretty leisurely-paced one at that.

Set in the 1920’s, Chad Lowe (remember him?) plays Billy Kelly, a dim-witted rube living in a tiny village with his drunk, abusive father and beleaguered mother. Through new girlfriend Alice (Mia Sara), he falls-in with John Reese (Donald Sutherland), a self-proclaimed doctor who practices “powwow medicine” (a type of faith healing). Reese is intelligent, compassionate and apparently able to perform medical miracles through pure faith. After Reese seems to cure his dad’s alcoholism, Billy sticks by his side (the “apprentice” of the title).

But Reese has a dark side, which Alice eventually tries to warn Billy of. He was once committed to an asylum, isn’t trusted by many of the locals and displays increasingly bizarre behavior. By now, however, Billy’s allegiance to Reese can’t be broken. So when the doctor claims a local hermit has cursed him, the two of them agree the man needs to die.

Apprentice to Murder purports to be based on a true story, which of course precludes the idea that the on-screen supernatural occurrences are anything but products of Reese’s imagination. Which is fine, since exploring how easily insanity spreads from one charismatic individual to a gullible recipient is a disturbing – and timely – concept (just look at all the anti-vaxxers roaming the world right now...in the 21st fucking Century).

The film itself is a mixed bag. There’s good attention to period detail and several scenes are wonderfully atmospheric. Even the deliberate pace is effective at times, especially when we slowly begin to question these so-called miracles. However, the story grows rambling and disjointed during the final act. The performances range from dull (Lowe) to amusingly overwrought (Sutherland) and with the exception of Reese and Billy’s dad (Eddie Jones), none of these characters are particularly engaging.

But for awhile, anyway, Apprentice to Murder is certainly watchable, even quietly unnerving at times, though it definitely isn’t a horror movie, despite being punctuated by a shrill synth score typical of the genre in the ‘80s. While not exactly a cult classic, this relatively forgotten obscurity has been given a decent restoration by Arrow Video, who throw in a few interesting bonus features (surprisingly light by their standards).

EXTRA KIBBLES
FEATURETTES - “Original Sin” (Interview with author/editor Kit Ellinger, who discusses the history of religion in horror films and literature); “Colour Me Kelvin” (Interview with cinematographer Kelvin Pike); “Grantham to Bergen” (Interview with make-up artist Robin Grantham, though I didn’t notice anything extraordinary about the film’s make-up work).
SUPPLEMENTARY BOOKLET – Cast/crew & restoration credits; Essay: “Spellbound: Ralph L. Thomas’ Apprentice to Murder,” by author Paul Corupe.
REVERSIBLE COVER – Featuring new and original artwork (we like the new one, though it also gives the impression of a horror film).