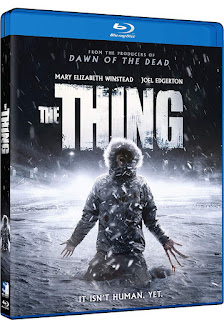 After first seeing 2011’s The Thing, what I mostly felt was relief.

Not only was John Carpenter’s 1982 classic the best sci-fi-horror film of the decade, its unnervingly ambiguous conclusion was perfect. So I was relieved that those involved with the 2011 film realized simply continuing the story would be blasphemous. After all, what self-respecting horror fan actually wanted to know the fates of MacCready and Childs?

But a prequel? Hey, what exactly did happen to those Norwegians who found the thing in the first place? Though it probably wasn’t really necessary, having that question answered could be interesting. And if nothing else, the reverence director Matthijs van Heijningen has for the original film is obvious in every frame.

One could argue too much reverence, since The Thing often plays more like a remake than a prequel. However, the film is seldom as tension-filled and atmospheric as the original. Part of that is due to relying too heavily on story elements we’re already familiar with, but also because of the dubious decision to use CGI for the transformation scenes. Since Rob Bottin’s legendary practical effects were a huge part of what made the original a classic and you've already gone to such lengths match its look and tone, why not go completely old school?

But while this version doesn’t measure up to the first film, it’s doubtful anyone really expected it to. That being said, The Thing isn’t without merits. There’s still some impressive moments of good ol’ fashioned goopy gore and Mary Elizabeth Winstead is solid in the ‘MacCready’ role, playing a paleontologist forced to take charge. The final act is especially enjoyable, when the film not-only ends on a similarly ominous note, it ingeniously sets-up some of the events that would unfold in the 1982 film (enhanced greatly by utilizing Ennio Morricone’s original theme during the end credits).

So while Carpenter’s film didn’t need a sequel, prequel, reboot or whatever you wanna call it, I was relieved. The Thing is as imitative as the title creature, but at least it’s conceptually faithful and leaves the original’s unresolved denouement alone. With hindsight, the film is probably the best prequel one could hope for. It should also be noted that, other than the cover art, this re-issue from Mill Creek Entertainment is the exact same as Universal’s 2011 Blu-ray release, including the supplemental material. No real need to double dip here.