THE WORLD, THE FLESH AND THE DEVIL: Sci-Fi Suds 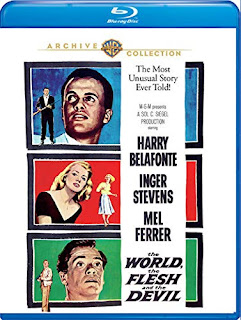 The World, the Flesh and the Devil is one of the stranger sci-fi films of the 1950s. No monsters, no aliens, no spaceships...just three lonely people trying to co-exist in post-apocalypse New York.

For much of the film, however, it’s only two. Following a nuclear attack that apparently killed millions, Ralph Burton (Harry Belafonte) emerges from the rubble to a desolate world, seemingly the only man left alive. He makes his way to New York, hoping to find survivors and eventually meeting Sarah (Inger Stevens). Ralph turns out to be pretty handy, restoring the electricity and even setting up direct phone lines between their two apartments.

That they live in separate buildings is an interesting dynamic. Sarah wants to be closer and they obviously have feelings for each other, yet in a compelling break from the typical '50s era film exploring issues of race, it’s Ralph who’s been conditioned to believe that being black somehow makes him incompatible. A telling moment is when Sarah laments she’s never been married, Ralph vows he’ll find her a proper husband and marry them himself.

So while they remain friends and he goes to great lengths to make her happy, he stays physically and emotionally distant. Then Benson (Mel Ferrer) arrives. Initially sickly and weak, Ralph & Sarah nurse him back to health, at which time he makes his attraction to Sarah clear. And even though Ralph is more than willing to step aside, Benson soon sees him as an obstacle to be eliminated.

Because of this dynamic, the film often plays more like a melodramatic soap opera than anything resembling science-fiction, especially Sarah’s mood-swinging histrionics. Despite being the last woman on Earth, she’s such a shrill, irritating, emotional roller-coaster that it’s difficult to see what either man sees in her. But other than that, this three-character play unfolds in unexpected ways, particularly the climax, which I suppose could be seen as provocative for its time. Belafonte brings much-needed gravitas to his role, especially when he’s wandering the city alone. One can’t help but think the visual power of these desolate scenes had a direct influence on 1971’s The Omega Man.

But while conceptually similar, this is not The Omega Man and takes a bit more patience on the viewer’s part to get anything out of it, especially if one is expecting old school apocalyptic sci-fi. Still, The World, the Flesh and the Devil paints an intriguing picture, briefly raising a few interesting points about human nature and societal norms along the way.