TEL AVIV ON FIRE and the Unconventional Collaboration 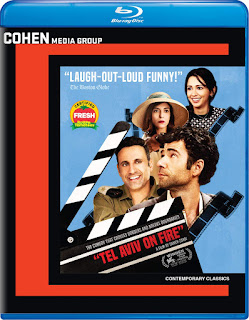 It’s nice to see that soap opera histrionics know no borders and are ripe for satire in any language.

In this quirky film, “Tel Aviv on Fire” is a massively popular soap opera that takes place in 1967 featuring Tala, a female Palestinian spy who, at the behest of her comrade/lover, Marwin, seduces Israeli General Yehuda in order to obtain vital information. Behind the scenes, Salam (Kais Nashif) is a slacker who’s given a low-level job by his producer uncle as a Hebrew translator. Each day, he crosses an Israeli checkpoint to get to work, but an amusing misunderstanding has him brought before the checkpoint commander, Captain Assi Tzur (Yaniv Biton), who discovers a script for an upcoming episode in Salam’s car. Since Assi's wife is a huge fan, Salam avoids arrest by claiming to be the show’s writer.

Then, despite having never written anything in his life, Salam actually becomes one of the show’s writers. With no idea what to do, he turns to Assi for story ideas. Assi agrees to help him on two conditions: That he’s regularly supplied with Hummus and, more importantly, the series culminates in Tala marrying General Yahuda instead of Marwin. This puts Salam in quite a bind, to try and convince the producer his changes to the story will make the show better, not-only extending it to a second season, but possibly saving his life. Along the way, Salam turns into a great writer, drawing inspiration from both Assi and his own relationship with estranged ex-girlfriend Maryam (Maisa Abd Alhady).

Tel Aviv on Fire is largely played for laughs, earning most of them during the segments surrounding the actual TV show. Additionally, Salam and Assi share some amusing moments as they debate the plausibility of Assi’s suggestions. Their relationship briefly takes a dark turn late in the story, which I suppose is necessary since Pakistanis and Israelis are adversaries, but it does negate the established tone. I also didn’t find the romantic subplot of Salam trying to win back Maryam particularly interesting, especially since she doesn’t come across as all that likable.

But overall, Tel Aviv on Fire is a generally agreeable satiric comedy with good performances. In the best night-time soap tradition, there’s also a great plot twist at the end that provides the film’s biggest laugh. While hardly a world cinema milestone, it’s certainly worth checking out at least once.

EXTRA KIBBLES
"CONVERSATIONS AT THE QUAD” - As customary for many Cohen Media releases, this is an audience Q&A with the director (Sameh Zoabi) following a New York screening of his film.