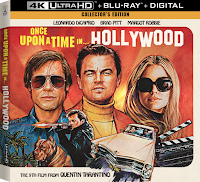 ONCE UPON A TIME…IN HOLLYWOOD Comes to Digital 11/25 and 4K Ultra HD, Blu-ray & DVD 12/10
Premium collectible packaging will contain a 7” vinyl record with two of the soundtrack’s grooviest tunes (complete with turntable adapter), a collectible vintage poster for the Rick Dalton film Operazione Dyn-o-mite! and an exclusive new MAD Magazine parody of the Rick Dalton TV series “Bounty Law,” Lousy Law. The collector’s edition is available for pre-order today from Amazon.com, Walmart.com, BestBuy.com and Target.com.

The 4K Ultra HD, Blu-ray, DVD and digital releases come loaded with even more sights and sounds of the ‘60s, featuring over twenty additional minutes of footage that delves deeper into world of Rick Dalton’s Hollywood. The 4K Ultra HD, Blu-ray and digital include an additional behind-the-scenes look at the film’s production design, cinematography, costume design, cars and more.

Collectors will also be delighted by exclusive packaging and gifts-with-purchase offered at retail for the film’s Blu-ray release. These include “Rick Dalton” movie poster cards available at Walmart, a vintage-style film magazine with over 26 never-before-seen production photos available at Target and a collectible steelbook available at Best Buy. All exclusive offerings are available for pre-order today.
Posted by D.M. Anderson at 10:38 AM