YESSONGS and the Revenge of the Nerds 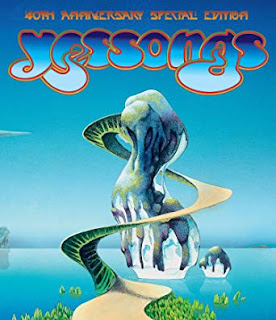 AVAILABLE ON BLU-RAY FROM
MVD VISUAL

Growing up, I remember when the cool kids listened to Kiss, the cooler kids listened to Led Zeppelin and the sheep listened to what they were told was cool by radio DJs. But Yes? That was for the nerds and stoners. Or more accurately, nerds who also happened to be stoners, the hipsters of their day. This was also the era of midnight movies, when aging movie houses and college cinemas would show stuff created to appeal to those in the wrong state-of-mind, which included a lot of concert films. One of those was Yessongs, filmed in 1972 during the band's Close to the Edge tour and released in 1975 when they were at the peak of their progressive-era popularity.

While I've always liked progressive rock, I was more partial to ELP because I didn't need a musical intellect to appreciate how their brand of abrasiveness drove my parents up the wall. But a buddy of mine, Rick, loved Yes because he was a nerdy stoner and a guitar player, able to greater appreciate their complex songs, cerebral lyrics and Steve Howe's intricate solos. Hence, we broke curfew one Friday night to partake in the Oregon flower before venturing to the 5th Avenue Cinema so Rick could get his Yes on. From the opening number, he was enthralled - as were a lot of other nerds in the audience - marveling at the musicianship and humming along with every song, occasionally engaging in a bit of air guitar. As for me...well, "Roundabout" was cool.

Keyboardist Rick Wakeman notwithstanding, Yes was never exactly renowned for their showmanship and not as conducive to a cinematic concert experience as, say, The Rolling Stones. Nor is Yessongs very imaginatively filmed (even Led Zeppelin's long-winded The Song Remains the Same had a goofy fantasy sequence or two to liven things up).

Which essentially means Yessongs is strictly a film for hardcore fans, those with an inherent appreciation for the band's 20 minute suites, virtuoso solos and Jon Anderson's quasi-mystical lyrics. Those same fans should get a kick out of this 40th Anniversary Edition Blu-ray. The original film didn't look or sound that great in '75, nor is this transfer much of an improvement (Yes still sounds like they're performing in a high school gymnasium). But in a way, that might be part of the nostalgic appeal for those who first caught Yessongs back in the day. Personally, I found the bonus feature, "Yessongs: 40 Years On," quite a bit more interesting. Nearly as long as the film itself, this retrospective documentary features guitarist Steve Howe, bassist Chris Squire and longtime album cover artist Roger Dean discussing the film and the band's lengthy career.

I still think "Roundabout" is the best thing Yes ever did and anyone who concurs might have a hard time sitting through the entire film (even at 70 minutes). But all the nerds who grew up on these guys will surely love having this relic from their youth on disc. And at our age, isn't it nice that you no longer need to venture out at midnight to catch it?