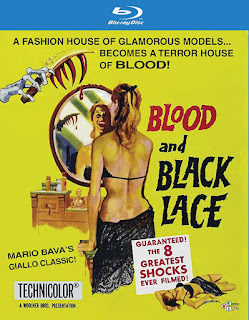 AVAILABLE ON BLU-RAY/DVD FROM
VCI ENTERTAINMENT

It would be interesting to see the direction Dario Argento's career would have gone if Mario Bava hadn't come along first. While Argento is widely considered the undisputed master of the Italian horror subgenre known as giallo, it was Bava who more-or-less invented it.

1960's Black Sunday may be Bava's most famous film (and arguably his best), but from a historical standpoint, Blood and Black Lace is probably his most important. Not only one of the very first giallo films, its style and narrative structure would also have a significant impact on the evolution of the slasher genre.

A cloaked, masked killer is stalking the beautiful models of a fashion agency, killing them one by one in search of a diary that supposedly has dirt on nearly every employee. Naturally, this means everyone is a suspect. This is all basic whodunit stuff, of course. But by placing unprecedented emphasis on style, vibrant color contrasts and extended murder sequences, Bava creates the template that his peers have been using ever since.

That being said, it helps to view Blood and Black Lace in the context of when it was made. Undoubtedly a product of its time, the dialogue, jazzy soundtrack and violence will seem quaint compared to, say, Deep Red, though the murder scenes are still pretty potent, especially in this uncut version. Visually, it's easy to see the influence the film had on Dario Argento's subsequent work. For anyone interested in giallo's humble origins, this is worth checking out.

Arrow Video released the film on Blu-ray a few years ago with a big batch of extras. I've never seen that version, though in addition to a nice 2K video restoration, this one from VCI has a few decent bonus features as well, including two brand new audio commentaries. It also comes with a cheaper price-tag.

NOT BAD. HISTORICALLY IMPORTANT.
Posted by D.M. Anderson at 4:26 PM