MAMMA MIA! HERE WE GO AGAIN: Truth in Advertising...Sort Of 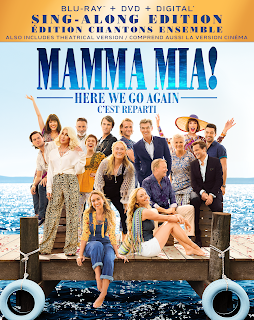 AVAILABLE ON BLU-RAY FROM
UNIVERSAL

Movies like Mamma Mia! Here We Go Again are sort of difficult to assess. On one hand, it's a strong contender for one of the most unnecessary sequels of all time. On the other, it is hard to imagine big fans of the original - or ABBA's music in general - not enjoying this one, as well. However, they might be surprised by the narrative's somber underpinnings.

Speaking of narratives, while I enjoyed the first film, I couldn't recall the actual plot shortly after seeing it. All that really stuck with me were the fun musical numbers, the fact Pierce Brosnan couldn't sing and a reminder that Meryl Streep is invincible. This time, we're getting a prequel, of sorts. Half the film takes place a few years after the first, with Donna's daughter, Sophie (Amanda Seyfried), getting ready to re-open her mom's hotel with the assistance of suave manager Fernando (Andy Garcia). Interspersed throughout are lengthy flashbacks of Donna (Lily James) in 1979, when she travels to Europe after graduation and meets Sam, Harry & Bill for the first time. She also falls in love with the island and ramshackle old house that she'd eventually turn into the hotel.

Along the way, there are plenty of musical numbers: a lot of tunes that only die-hard ABBA fans would be familiar with, as well as a few bonafide classics (including some featured in the first film). The numbers are sunny and fun, as is the choreography, which is a good thing since what little plot there is feels superfluous (and sort-of melancholy). Nearly all of the original cast returns, slipping comfortably back into their roles. But despite being prominently featured in the ad campaign, Meryl Streep is largely absent. She was the glue that held the original together and is sorely missed here. As for the ballyhooed addition of Cher...I guess if you're a fan, her appearance won't feel shoe-horned into the story, but her role is mostly a glorified cameo.

But we're here for the music, right? As before, everyone does-right by the songs and those who can't sing are mercifully regulated to being part of the chorus (sorry, Mr. Brosnan). Writer/director Ol Parker takes the reigns from Phyllida Lloyd and wisely stays the course, maintaining the first film's aesthetic and pace (though one suspects he was forced to fashion a story that didn't require heavy commitment from Streep). But bittersweet tone notwithstanding, Mamma Mia! Here We Go Again is an aptly-titled sequel if there ever was one and unlikely to disappoint anybody who regularly sings along with the original film.

Speaking of which, this disc is loaded with bonus material (listed below), including the prerequisite "sing-along" feature. Most of the featurettes are pretty short, but there's a lot of them and they're pretty entertaining.