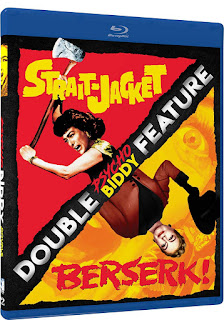 There was always something unnerving about Joan Crawford, particularly during her post-Mildred Pierce career. Sure, that could be partially attributed to posthumous character-shredding at the pen of her own daughter (who wrote Mommie Dearest), which cemented her in pop culture as a monster. But there was also something about her general onscreen appearance that looked increasingly artificial...like she was waging all-out war on the ravages of time with every weapon in her arsenal. By the 1960s, Crawford and her considerable eyebrows were the stuff of nightmares.

Maybe that's why she was cast in more "hagsploitation" movies than most of her peers. The two films in this collection aren't quite as much freaky fun as the subgenre's magnum opus, Whatever Happened to Baby Jane?, but Ms. Crawford's unique brand of over-emoting is here in abundance.

1964's Strait-Jacket is the better crafted of the two, featuring Crawford as Lucy, who's released from an asylum 20 years after axing her philandering husband and his lover to death. Shortly after moving in with her daughter (Diane Baker), the ax killings begin again. Naturally, we suspect Lucy might be resuming her old ways. For a William Castle film, this is actually a pretty subdued affair, though both Crawford and Baker unleash some prime scenery chewing at opportune moments.

The other film, 1967's Berserk!, has a trainwreck quality that's hard to resist. Crawford plays Monica Rivers, the ruthless owner and ringleader of a traveling circus (and sporting some of the most embarrassing costumes of her entire career). When performers starting dying in a variety of gruesome ways - usually during their act - foul play is suspected. Since the deaths result in increased ticket sales, Rivers becomes a suspect, as does hunky new trapeze artist Frank Hawkins (Ty Hardin). There's a lot of fun to be had at the movie's expense...the wildly out-of-place music score, lengthy scenes of circus performances that don't advance the plot one iota and the weirdest non-Rocky Horror musical number you'll ever see.

By far, though, the horrific highlight is the affair between Rivers and Hardin. Crawford looks like that scary old aunt you're afraid to kiss because she reeks of cigarettes and cold cream. Watching her vamp-it-up while a shirtless Hardin - 30 years her junior - lusts after her is as morbidly fascinating as witnessing a one-sided fist-fight. You want to intervene, or at least turn away, but just can't.

Interestingly, Strait-Jacket has also been recently released by Shout Factory as a stand-alone Blu-ray. While that disc comes with a batch of bonus features, it's also a lot pricier. Not only is this Mill Creek release cheaper and sports a decent picture as well, the inclusion Berserk! makes this set preferable for those who enjoy high-camp hilarity.