PREHYSTERIA!: A Kids Movie for Thirtysomethings 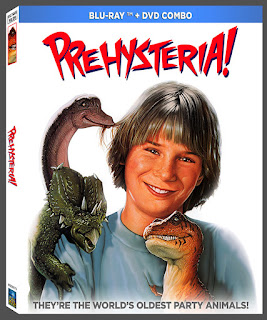 At the start-up of this disc, there's a trailer with a montage of several Full Moon Features cult horror classics to promote the company's Amazon channel. Many of the clips contain violence, blood and sex. One might initially question why something like this would precede a family film, until you realize that anyone who enjoyed Prehysteria! back in the day are now in their mid-to-late 30s, and I seriously doubt any kids today would be interested in a movie like this. Full Moon knows damn well who their audience is.

Since 90s' nostalgia appears to be a thing now, those same thirtysomethings who grew up on Full Moon's economic brand of straight-to-video entertainment might hold the same reverence for Prehysteria! that my generation did for The Shaggy D.A. In retrospect, both are terrible films, but sure enjoyable when we were too young to know any better. And sometimes it's fun revisiting childhood pleasures.

Full Moon Features is, of course, known for horror movies, but did produce a number of fantasy-oriented family films under the Moonbeam Entertainment banner. Of those, Prehysteria! is arguably the only one to really find an audience, who were probably more enamored with the concept than the story itself: What kid wouldn't love the idea of miniature dinosaurs scuttling around the house, especially after Jurassic Park just made them cool again?

Naturally, Prehysteria! is no Jurassic Park...or We're Back...or even Carnosaur. The dinos are cute-but-clunky, the humor is eye-rolling, the performances are pedestrian and the story nearly non-existent. Anyone reading this probably already knows that and doesn't care. For them, this Blu-ray is a silly little trip back to the good ol' days of perusing the local Blockbuster armed with indiscriminate tastes.