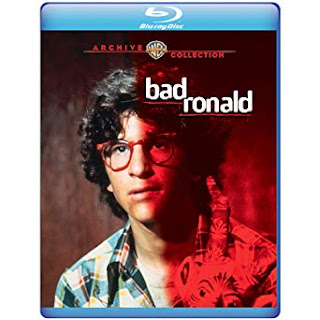 I have fond memories of the ABC Movie of the Week, which used to air on Tuesdays back in the early 1970s. This anthology series consisted of modestly-budgeted made-for-TV movies from a variety of genres. Not a lot of them were memorable, but some served as pilots for popular television shows and a few - such as Duel and Brian's Song - were as good as anything playing in theaters.

Some of the horror-based episodes, such as Trilogy of Terror and The Night Stalker, have since become cult classics among those who grew up on them. Watching these movies on a flickering, hand-me-down black & white TV was my first real introduction to horror, as it probably was for a lot of children of the 70s.

Bad Ronald is not as revered as those aforementioned titles, but like Killdozer, enough of a cult item to at-least inspire a band name. I vividly remember being disturbed by the concept: Teenage misfit Ronald Wilby (Scott Jacoby) accidentally kills a taunting peer. His overprotective mother (Kim Hunter) comes up with an idea to keep him in a hidden room so no one can find him, telling the police he ran away. After she dies, Ronald remains in the house, staying hidden from the new owners, a family with three daughters, one whom he begins to obsess over.

Revisiting it with adult eyes - I think this is the first time I've ever actually watched it in color - Bad Ronald is more quaint and campy then it was all those years ago, playing more like the type of lurid quickie William Castle used to crank out a decade earlier. Still, the story remains kind-of fun, bolstered by tight storytelling and Jacoby's wonderfully creepy performance. Whatever happened to him, anyway?

Aesthetically, Bad Ronald is pretty dated and probably lost all its power to scare audiences a long time ago. But anyone who grew up on this stuff will certainly find it an amusing trip down memory lane. And with a great Blu-ray transfer, the movie didn't look this good even during its original broadcast.