The Original INVASION OF THE BODY SNATCHERS: Olive Signature Edition 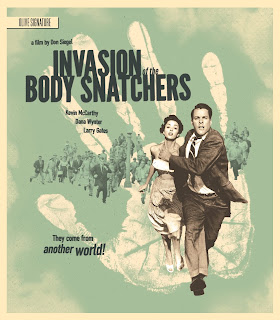 One of the coolest things about the original Invasion of the Body Snatchers is that it's conceptually timeless, which is probably why the film has been remade three times since its inauspicious 1956 release (with another one reportedly in development). And let's not forget countless others - big & small, good & bad, classic & obscure - that have drawn obvious inspiration from it.

Social commentary and themes notwithstanding, the original still holds up as a smart slice of provocative sci-fi horror, certainly belying its minuscule budget and drive-in fodder title. Despite the film's iconic climax - when Miles (Kevin McCarthy) breaks the fourth wall to warn us we're next - its most effective moments remain the subtle ones. The scene where Miles (Kevin McCarthy) realizes Becky (Dana Wynter) is no longer Becky is still one of horror's most quietly chilling moments, while the pod people "gathering" at Santa Mira's town square is truly unnerving.

Then there's those seed pods. They may appear quaint compared to their horrifically-gooey counterparts in the 1978 remake, but a strong argument can be made that the greenhouse scene is one of cinema's earliest examples of the type of "body horror" David Cronenberg would make a career from decades later. It's amazing what you can do with a few soap bubbles, and the sequence remains a wonderful early example of gross-out entertainment.

Invasion of the Body Snatchers has been released on Blu-ray before, but this time Olive Films has thrown-in a plethora of new and vintage bonus features (outlined below), all of which are entertaining and informative. Along with a great video & audio transfer, this is, so far, the best release in Olive's ongoing Signature series and one of the best Blu-rays of the year. A must own for any cinephile, even if they own a previous version.

EXTRA KIBBLES
NEW FEATURETTES:
"The Fear is Real" - Directors Larry Cohen and Joe Dante recall their first experience seeing the film and its influence on thier own careers.
"I No Longer Belong: The Rise and Fall of Walter Wagner" - Author Matthew Wanger discusses the career of the producer, who derailed his own career by shooting a man.
"The Stranger in Your Lover's Eyes" - Director Don Siegel's son reads from the director's autobiography, along with vintage photos.
VINTAGE FEATURETTES:
"Sleep No More: Invasion of the Body Snatchers Revisited" - The best of all the bonus features, with commentary from its two stars, contemporary directors and historians.
"The Fear and the Fiction" - A feature about the movie's cultural impact.
"What's in a Name?" - An amusing look at some alternate titles that were considered.
"Return to Santa Mira" - A look at the various shooting locations.
2 AUDIO COMMENTARIES - One by historian Richard Harlan Smith, the other a vintage commentary by Kevin McCarthy, Dana Winter and director Joe Dante.
VINTAGE KEVIN McCARTHY INTERVIEW
IMAGE GALLERY
TRAILER
ESSAY - "At First Glance, Everything Looked the Same," by Kier-La Janisse

LIKE BEING TURNED LOOSE IN A BIRD SANCTUARY
Posted by D.M. Anderson at 8:45 PM