TO ENTER: Simply drop us a message using the 'KITTY KONTACT' form at the top of our side column. CONTEST ENDS 11/6. 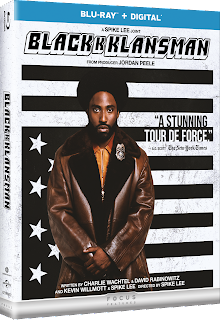 Based on the book Black Klansman by Ron Stallworth, BlacKkKlansman is filled with outstanding performances from an all-star cast led by John David Washington, Adam Driver, Topher Grace  and Laura Harrier  alongside an incredible roster of supporting talent including Alec Baldwin, Corey Hawkins, Ryan Eggold and Paul Walter Hauser.

From visionary filmmaker Spike Lee comes the incredible true story of an American hero. In the early 1970s Ron Stallworth (Washington) becomes the first African-American detective in the Colorado Springs Police Department. Determined to make a difference, he bravely sets out on a dangerous mission: infiltrate and expose the Ku Klux Klan. He recruits a seasoned colleague, Flip Zimmerman (Driver), into the undercover investigation. Together, they team up to take down the extremist organization aiming to garner mainstream appeal. BlacKkKlansman offers an unflinching, true-life examination of race relations in 1970s America that is just as relevant in today’s tumultuous world.

Packed with bold and provocative moments from beginning to end, BlacKkKlansman on 4K Ultra HD, Blu-ray, DVD and Digital comes with exclusive bonus content that will take viewers deeper into this timely and moving true story.