NIGHTWING and SHADOW OF THE HAWK: Two for the Niche Crowd 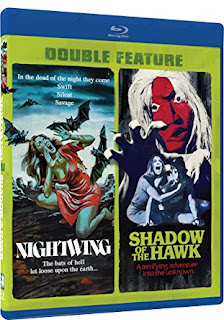 Well, mostly forgotten. I actually recall seeing Nightwing in theaters, back when everyone, including yours truly, was still stricken by Jaws fever and it seemed like another knock-off popped up at my local Southgate Quad every week. Some where okay, most were terrible and none came close to giving me the visceral rush of Jaws.

Nightwing gives us vampire bats that terrorize an Indian reservation in New Mexico. Stonefaced local deputy Youngman Duran (Nick Mancuso) teams up with obsessive bat hunter Dr. Payner (David Warner) and perky girlfriend Anne Dillon (Kathryn Harrold) to try and destroy the proliferating pests. Other than some livestock and a few dumb tourists, these bats don't do much actual killing and the first half is really slow going. Things eventually improve, though the special effects are laughably terrible throughout. On the plus side, Warner's campy performance is wonderfully over-the-top. Based on his manic description of these animals, you'd think they were gonna bring about the apocalypse.

While mostly bat guano, Nightwing still holds morbid historical interest for the surprising amount of genuine talent behind it. This wasn't the usual low-budget Jaws ripoff. It was directed by none-other than Arthur Hiller, known for such classics as The Americanization of Emily, Love Story and The In-Laws. Amazingly, Carlo Rambaldi, who'd already worked on Close Encounters and Alien, created the silly looking bats (which look more like angry dachshunds). Not only that, legendary composer Henry Mancini is onboard to provide the score. One can only assume these guys' paychecks included a lot of zeros.

But at least Nightwing is kind of fun, even if that fun generally comes at its own expense. Shadow of the Hawk, on the other hand, is a comparatively dull and takes its ambiguous story way too seriously. Despite a few creepy moments, it looks and plays like a TV movie-of-the-week from the era: competently made, but with little genuine style or atmosphere. Jan-Michael Vincent plays Mike, a cynical businessman whose Native American grandfather (Chief Dan George) shows up to groom him as a tribal shaman in order to battle a malevolent demon. On the way back to the village, he fights a bear to the death, is pursued by a demonic car, blows up an owl and locks lips with new friend Maureen (Marilyn Hassett).

Consisting mostly of individual set-pieces rather than a cohesive narrative, Shadow of the Hawk is more of a mystical road movie than a horror film. The overly serious screenplay is filled with groan-worthy dialogue, not helped by wooden performances from Vincent and Hassett (neither of whom were ever outstanding actors to begin with). Then again, what else would you expect from a director whose greatest claim to fame was Frogs? However, if you're looking to complete your Jan-Michael Vincent collection - and who isn't? - here's your chance.

Since I have fond memories of hanging out at the Southgate Quad every weekend, Nightwing was a pleasant nostalgia trip. There might even be those with a similar sentimental fondness for Shadow of the Hawk. Neither of these titles would be worth picking up individually, but as a reasonably-priced double feature with a decent video transfer, this Blu-ray is probably has a niche audience who might dig it.